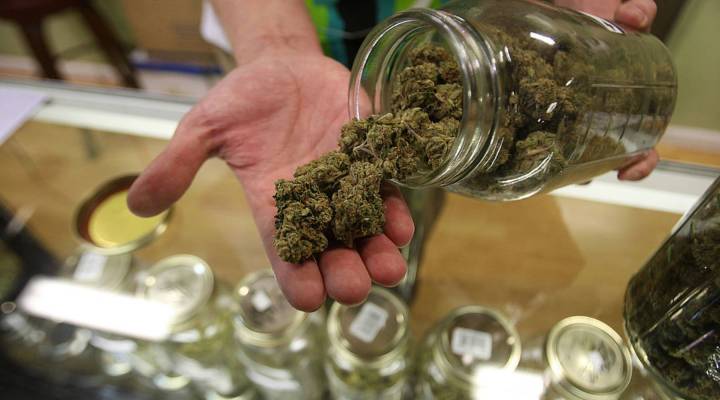 Starting in January, anyone over the age of 21 will be able to buy recreational marijuana in California. That’s already the case in states like Oregon and Washington. And while buyers will be able to choose from a cornucopia of cannabis products, law enforcement still won’t have a fast, reliable test for intoxication. Standard breathalyzers can’t detect marijuana, and blood and urine tests aren’t sensitive enough to show whether someone consumed marijuana five minutes ago or last week. Companies hoping to get in on the marijuana market are racing to develop a testing device for police and employers.

“The problem is really figuring out who is actually stoned — shouldn’t be behind the wheel or in the  cockpit of an airplane, or in an operating room in the hospital — versus who has THC — the active ingredient in marijuana — just floating around in their system,” Mike Lynn said.

Lynn is an emergency medicine physician in Oakland, California and a reserve deputy sheriff with Alameda County. He’s also CEO of Hound Labs, one of the companies developing a marijuana breathalyzer. The Hound device is a small, black breathalyzer that has a tube sticking out of it — you blow through it a few times, and, Lynn said, it’s able to analyze and detect the amount of THC in someone’s breath in minutes.

“We’re making it ergonomic and quick and easy to use,” Lynn said. “By the end of the year we will be able to sell to police officers.”

Mike Lynn, an emergency medicine physician and CEO of Hound Labs, with his company’s marijuana breathalyzer.

Research shows the level of THC in someone’s breath rises right after smoking, and then trails off after a few hours. Those first few hours are when someone is most likely to be impaired, according to the National Highway Traffic Safety Administration. That’s why a marijuana breathalyzer would be a big improvement from blood and urine tests — which aren’t sensitive enough to determine whether someone smoked marijuana right before driving, or days ago at a party.

The German-based company Drager sells a device that uses saliva to detect THC, but it does not read the level of intoxication.

“The Dräger DrugTest 5000 is currently in field use or pilot programs by law enforcement agencies and Drug Recognition Expert-trained officers in more than a dozen states in the U.S,” a spokesperson for Drager said.

Sergeant Marc Vincent is a Drug Recognition Expert in Texas. He says if a breathalyzer or a saliva test is proven to accurately measure trace levels of THC in clinical trials, police officers across the country would be interested.

“There’s several of them trying to come out with the devices,” Vincent said. In addition to Hound Labs, Canada-based Cannabix Technologies says it is in the process of developing a breathalyzer.

“[A marijuana breathalyzer] is certainly an extra tool,” Vincent said. “It would be very beneficial for us.”

The problem with all the THC tests in development, Vincent said, is they measure an amount, not a behavior.

“Just because there’s marijuana [in their breath] — I need to be able to show, prove impairment that they can’t safely operate a vehicle,” he said.

Some states where it is legal to smoke pot for medicinal or recreational purposes, like Colorado and Montana, have selected a limit of five nanograms for THC in blood. But scientists disagree on what amount — whether in blood or breath — indicates someone is too high to drive.

Kara Lynch, an Associate Professor of Laboratory Medicine at the University of California San Francisco said there will need to be studies to correlate levels of breath with impairment to establish a standard.

“There’s a lot that’s not known, so there are a lot of studies that can be done,” she said.

Lynch is currently running a clinical trial using the Hound Device to measure levels of THC in breath over time.

“We are also doing blood collection to see if THC levels in breath correlate with levels in blood. No one has done those studies,” she said.

Companies trying to sell marijuana breathalyzers might have to wait for a standard measuring system if they hope to sell out of their measuring sticks.