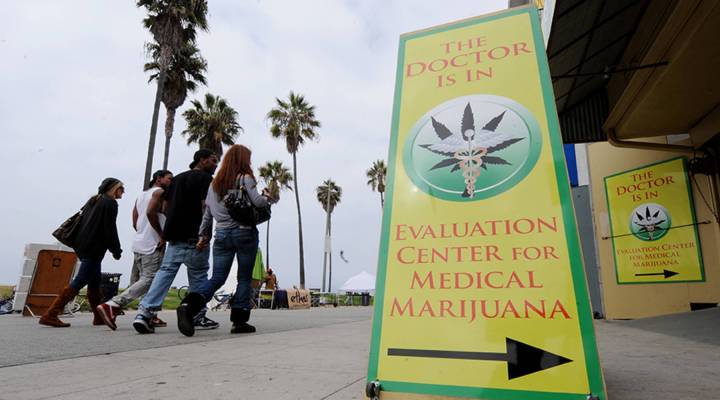 Randall Huft once crafted ad campaigns for United Airlines and Nestle. Now he’s schmoozing with clients inside a Marriott ballroom near Disneyland, at the California Cannabis Business Conference.

“Now we’re one of the leading ad agencies in the cannabis sector,” said Huft, creative director at the Innovation Agency. “It’s probably about 80 percent of our work right now.”

With recreational marijuana sales becoming legal in California on Jan. 1, cannabis-related businesses are looking to score a chunk of an expected $5 billion market. That sounds like a big opportunity for advertising firms and media companies that host cannabis ads, but selling, using and advertising marijuana is still illegal under federal law, and navigating the maze of regulation isn’t easy.

This year, Huft made his first cannabis industry TV commercial. It was for a device that vaporizes cannabis oil, from a company called Eureka. But it was tricky, because broadcasters operate under federal licenses, so they’re especially cautious about taking ads that could violate federal laws.

“So, we ended up putting together a commercial that never shows the product and never says what the product is for,” Huft said.

Instead, generic phrases like “Discover Passion” and “Discover Joy” appear over footage of happy people. In the ad’s final seconds, the company’s website flashes on screen. Eureka says it spent $12,000 to run the late night spot for one month, but it didn’t boost traffic to the website, so they pulled it.

An alternative to TV could be online advertising, but Google and Facebook both prohibit marijuana ads, so it could be the old-fashioned print medium that stands to gain the most.

“I think it’s a budding opportunity. No pun intended,” said Jim Ewert, general counsel at the California News Publishers Association, which represents 1,400 dailies and weeklies. When the state’s new pot law kicks in next year, so do new state regulations for cannabis ads. They’ll be allowed in publications where 71.6 percent of the audience can be reasonably expected to be over 21.

“A lot of newspapers are looking at the regulations to measure to what degree there might be potential liability for running recreational cannabis ads,” Ewert said.

Meanwhile, many cannabis entrepreneurs see print ads as costly, compared to the number of people who see them. Greg Gamet runs dispensaries in Colorado and a massive grow facility in California.

“When we decide to advertise, we really have to look at who’s going to see it, what kind of return we’re going to get,” Gamet said. “You really need to make profit off your advertising to be able to afford to do so at the end of the year.”

Gamet says he spends as little as possible on ads, less than 3 percent of gross sales. Like many growers and dispensaries, he tries to bypass advertising and use social media and other low-cost, less regulated ways to build a brand.