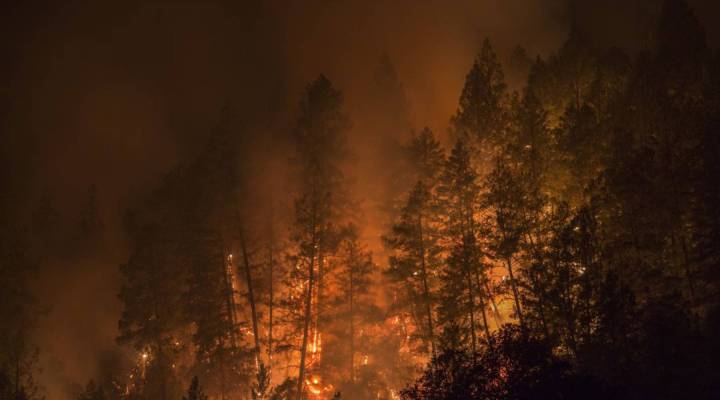 As wine growers assess the damage from the Northern California wildfires, marijuana farms are also counting their losses. But unlike other businesses, they have little reprieve.

“We’ve lost millions of dollars of product for sure,” said Ned Fussell, CEO of CannaCraft. “And we have no insurance.”

Even though California will begin issuing licenses for commercial cannabis starting in January, farmers like Fussell do not qualify for crop insurance, because growing marijuana is still against federal law.

Fussell’s company — one of the largest cannabis manufacturers in California — grows marijuana plants and turns them into cannabis oil, which is used to create over 100 different products. Fussell owns about 20 farms in Northern California, but he’s been able to access only a few of them. The others are in fire zones, still burning.

“As bad as this looks, others are a lot worse,” Fussell said Monday morning. “A lot of them are just totally incinerated.”

Hezekiah Allen, executive director of the California Growers Association, said many smaller farmers lost not only their farms, but also their homes.

“This all comes at about the worst timing,” Allen said. “October is harvest season, and many of these farmers have poured their life savings into this business.”

On Fussell’s farm in Santa Rosa, smoke still rises from what once was a 10,000-square-foot curing barn, where CannaCraft stored and dried marijuana before pressing it for oil.

Fussell points into the only thing left standing, a 40,000-square-foot greenhouse with hundreds of marijuana plants inside. There are dozens of heavy industrial fans blowing, and Fussell said there’s a 50-50 chance that even this crop has been ruined by the smoke.

“We’re just concerned about what contaminants might be in the air. We’ll have to test for all those things now,” Fussell said.

Fussell is using a gas generator to pump the wells for water to preserve what little crop is left. He said that while it is devastating, pot farmers are resilient, and they’ve already gone through a lot to get this far.

“We’ve been kicked down many times before, and I’ve always found it’s really important to just kind of keep a level head through it all and just try to, like, see the light at the end of the tunnel,” Fussell said. “And I look all around us, and see so many people have lost so much more. It’s sobering.”

Fussell’s company is now doing what it can to assist other farmers affected by the fires. They’re forming a nonprofit to collect donations for smaller farmers who were wiped out.

“Not everyone will survive this,” he said. “These fires will have profound effect on the industry.”