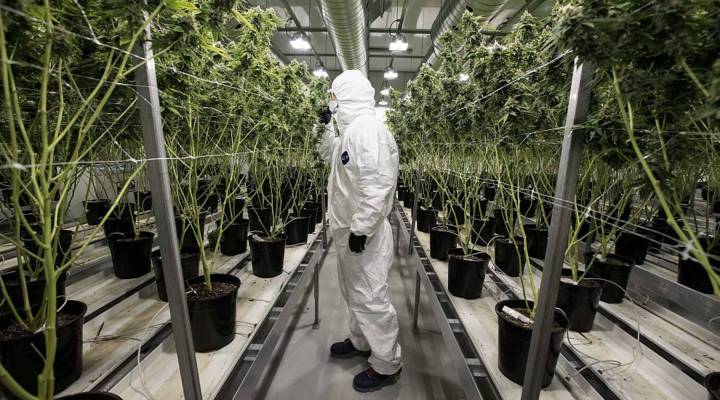 COPY
An employee with medicinal marijuana plants in the flowering room at Tweed INC. in Smith Falls, Ontario, on December 5, 2016.    LARS HAGBERG/AFP/Getty Images

Recreational marijuana is legal in California, but there is still no place to buy it, and there will not be until the state works out regulations. That could take a year. In the meantime, local governments are laying out rules on where marijuana can be bought and sold.

As you could imagine, these rules are having an impact on the real estate market for commercial marijuana spaces. The general trend is limited supply and high prices.

In places like the city of San Jose, local governments have banned the sale of recreational marijuana. Other cities stipulate that marijuana businesses must be a certain distance from schools and community centers.

Herzberg said, “We own a dispensary in the city of Santa Ana and in order to buy that building we payed close to double market value.”

In other states that have legalized recreational marijuana, real estate analysts have noted widespread impacts, like falling warehouse vacancy rates in Colorado or an uptick in commercial prices in Southern Oregon.

In California the rising demand and prices of real estate have so far been more localized, but still dramatic.

Aaron Johnson is a real estate lawyer in Monterey County, a big agricultural region. The county government is allowing certain old greenhouses to be used for marijuana cultivation.

Johnson said, “Literally within a period of two weeks I saw the prices go from $50,000 an acre for undeveloped industrial land to about $300,000 an acre.”

When it comes to places for selling marijuana, there are many factors that have made real estate prices rise. You can see all those forces at work in a city like San Francisco, where Al Shawa runs a medical marijuana dispensary.

Shawa’s dispensary is 4,000-square-feet. Any commercial space that big will cost you. This is San Francisco. And Shawa’s place is also far enough away from schools to qualify for a permit to sell cannabis.

Al Shawa only got into the marijuana business because he happened to own the right building.

Shawa says he only got into the marijuana business after discovering his building just happened to meet the requirements. He used to sell clothing and had never even smoked marijuana. Now, in his old clothing store, Shawa has a booming medical marijuana business. He started with 13 products. Today he has over 300.

This is another reason for increasing pressure on commercial marijuana real estate. Cannabis is more commodified than ever. Retailers need lots of space to market their growing number of products.

The whole jump in real estate prices is anticipatory, given how much money there is to be made in the marijuana business. The research firm Arcview Group estimates California’s cannabis industry could grow to $6.5 billion by 2020, making California by far the largest market for legal marijuana in the world.