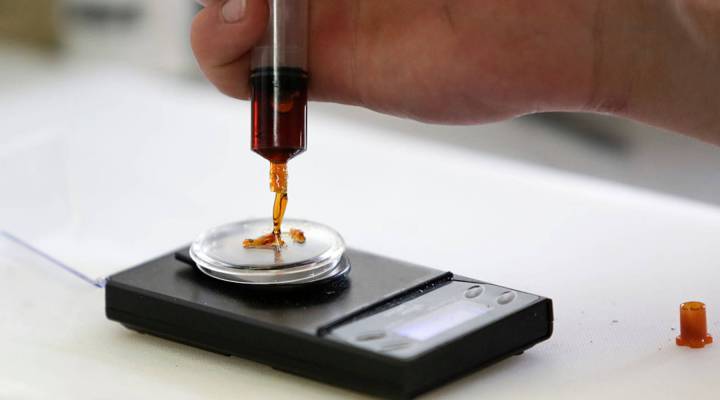 Margarita’s 13-year-old son, Carlos, usually sits in a wheelchair. He suffered a cardiac arrest just after birth and was diagnosed with near loss of brain function. Since then, Margarita has dedicated herself to taking care of him, becoming well acquainted with his frequent epileptic seizures and spending thousands of dollars on hospitalizations.

Margarita lives in an apartment near the center of Mexico City with the signatures of a modest middle-class life there: a spacious living room, a balcony, plenty of room for her family of four. But when it comes to medical care, “in this country,” she said, “only rich people can afford to get sick.”

The high cost of her son’s medical care is one reason why early last year, Margarita started giving Carlos something she got on the black market: oil extracted from marijuana. A container about the size of an eye drop bottle containing the oil cost her about $35. He now seems more connected and the seizures seem to have eased, she said.

What Margarita is doing is still illegal in Mexico, which is why we are not using her full name. But the legal sale of marijuana has picked up momentum this year not only in the U.S. but also in some Latin American countries. Uruguay has just started allowing marijuana sales in drug stores. And now Mexico, which has seen tens of thousands of deaths in its war against drug traffickers, is taking steps to legalize medical marijuana.

Mexican President Enrique Peña Nieto approved a law in June calling on the Health Ministry to write rules for the medical use of marijuana. Initially, many politicians, including Jose Luis Oliveros Usabiaga, a member of the center-right National Action Party and youth committee chair in the lower chamber of Congress, opposed the legislation when it was being debated.

“My opposition, of course, was to addiction. It felt like giving a child a gun to play with,” Oliveros Usabiaga said.

But the country’s Supreme Court later determined that the prohibition of the consumption or cultivation of marijuana violated fundamental human rights. Oliveros Usabiaga, who has since stepped down from office, now supports legalization, he said.

Peña Nieto eventually gave a speech at the United Nations lamenting the human toll of the country’s decadelong drug war against drug traffickers and pledging to push for legislation allowing the medical use and scientific research of marijuana.

“Thousands of lives depend on this,” Peña Nieto said.

So does this mean Mexico will suddenly legalize marijuana for recreational or medical use?

“No, no, no. We’re still far from that,” said Alejandro Madrazo, a law professor and head of the drug policy institute at Mexico’s Center for Research and Teaching in Economics.

Given the Mexican government’s no-to-drugs, tough-on-crime history, Madrazo expects the Health Ministry to issue very conservative rules, he said. This potentially means only the use of hemp oil.

But, Madrazo adds, the new law opens the door for future administrations to write more broadly applicable rules for the medical use of marijuana or for recreational use. It also means Mexican pharmaceutical companies could be allowed to apply for marijuana patents that would have to be respected in the more than 40 countries where Mexico has trade treaties, Madrazo said.

“The patents made here would immediately have to be respected elsewhere in the world as marijuana becomes legal for medical use,” Madrazo said.

The Health Ministry has until the end of the year to issue its rules. In the meantime, Margarita and mothers like her aren’t going to wait, she said. Breaking the law isn’t her biggest worry, she said; she’d rather get arrested than see her son sick.