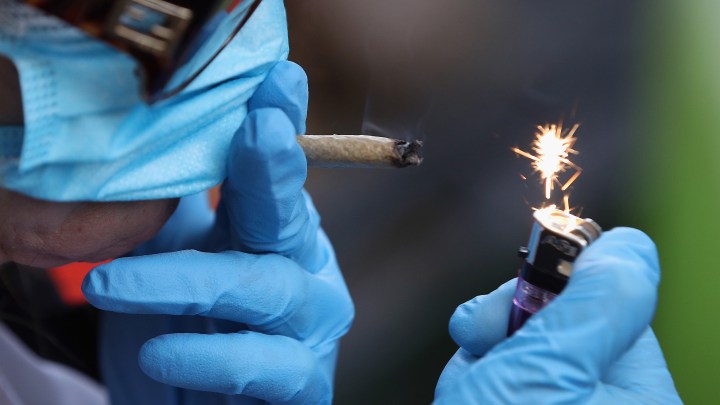 It is Monday, April 20, which means it’s also 4/20 — the ad hoc international holiday to celebrate marijuana use and legalization.

You would think anything that involves large groups of people joining together, listening to music and speeches about legalizing pot and sparking up some joints would be cancelled in this year of COVID-19.

But organizers are calling for the celebrations to go ahead — safely, with no public gatherings, but instead virtual ones, online.

Pandemic or not, the recreational marijuana industry is doing just fine.

Oregon is one of 11 states where it’s legal for adults to use recreational marijuana. Many businesses are closed due to the COVID-19 pandemic, but pot stores are staying open, many of them preferring curbside service.

Cannabis retailers are deemed “essential” — it’s the same in most states where recreational marijuana is legal.

And sales have held up well, says Troy Dayton at the Arcview market research group.

“At the beginning of this, sort-of mid-March, there was a huge spike in sales,” Dayton said. “As people were panic buying, this was one of the products that they were stocking up on.”

Cannabis sales are still up compared to last April in major markets like California, Washington and Colorado.

“Cannabis, much like alcohol, has the potential to be a counter-cyclical product,” Groh said. “Counter-cyclical businesses make products that actually see increased demand in times of economic distress.”

The cannabis business is volatile. Last year, several high-profile startups saw their stock soar, then fall back down to earth.

“There was a bit of overvaluation happening, there was a bubble that kind-of burst on it, not dissimilar to what we saw during the dot-com bubble,” Dayton said.

Eli McVey, at Marijuana Business Daily, predicts strong sales growth will continue once the COVID-19 economic crisis is past

The pandemic will delay legalization efforts in new markets, like Missouri and New York.