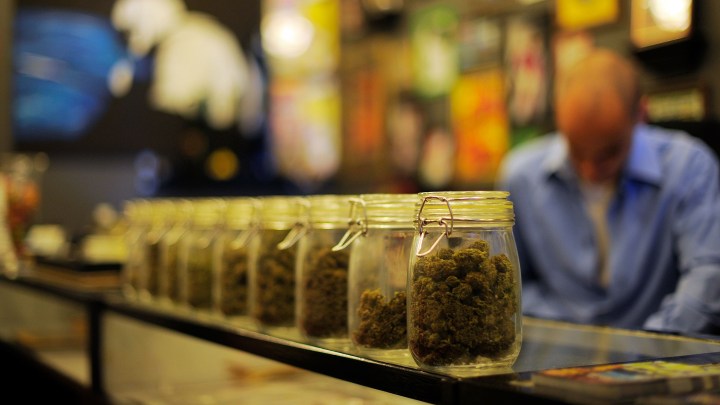 On Jan. 1, Illinois became the 11th state to allow recreational marijuana sales. But despite its increasing availability in the U.S., laws to protect cannabis-using job seekers are still uncommon.

That’s changing in Nevada, which legalized recreational use of pot in 2017, and now bans employers from denying jobs to applicants who test positive for marijuana on a pre-employment drug test — excluding jobs with safety issues, like fire fighters or other emergency responders.

Such protections aren’t available in California, where recreational use has been legal since 2016 and medical use has been legal for more than two decades. That’s made finding work difficult for 20-year old Layla Larson, who said she uses cannabis daily to manage her epilepsy and anxiety.

“I’ll go on Craigslist and look for job offerings, or I’ll look on the mall website and it all says, ‘Requires a drug test,'” she said.

While Maine bans hiring discrimination based on cannabis use, and many states limit random drug testing for employees, Nevada is the first state to explicitly restrict pre-employment drug tests.

“Clearly drug testing policies are lagging behind, said Ethan Nadelmann, the founder of the Drug Policy Alliance, which advocates for liberalizing drug laws. He said without protections for job seekers, cannabis users can still feel criminalized. He noted there’s a class element too, as many minimum wage jobs in retail and food service still test for cannabis.

Attorney James Reidy specializes in employer law in New Hampshire and said he has seen a drop in the number of companies testing for marijuana, but some business owners still insist on it.

“What that gets to is the notion of, ‘Could this affect someone’s attendance? Is this going to affect their motor skills?'” he said. “But it also could be — in part — a moral judgment.”