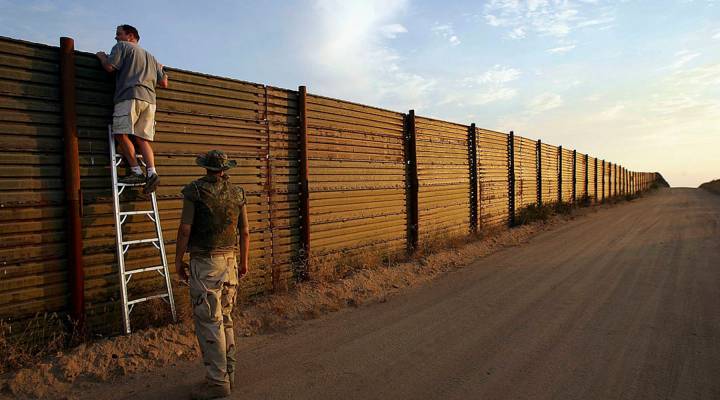 The bids are in and construction on the prototypes is set to begin later this year. It would seem like the plans for President Donald Trump’s border wall with Mexico are coming along. Except for one problem: who is going to pay for it?

So far, the current administration was able to scrounge up $20 million to build prototypes of the potential designs of the 30-foot tall wall. That money was previously meant to cover mobile video surveillance for Customs and Border Protection, according to a Senate report compiled by Democratic staff. That same report found that the construction of the wall was going to cost as much as $70 billion, “amounting to a total cost to every American man, woman, and child of over $200.”

The lack of funding for the wall has yet to dissuade Trump from attempting to fulfill his campaign promise. Earlier this week, while speaking at a rally in Phoenix, Arizona, Trump promised thousands of supporters that the wall was coming.

“If we have to close down our government, we’re building that wall,” he said on Tuesday. “One way or the other, we’re going to get that wall.”

Trump has tried to come up with a few ways to pay for the wall, but so far each idea has been met with resistance. No one, it seems, wants to foot the bill.

Mexico won’t pay for the wall

Mexican lawmakers have said it many times — they are not paying for the wall. It got to the point where on one of the earlier calls of his presidency, Trump urged Mexican President Enrique Peña Nieto to to stop saying that Mexico will not pay for the wall.

On that same call, Trump told Peña Nieto that the wall “might be the most important” campaign promise Trump made, which is why he wanted to keep Peña Nieto’s refusal to pay out of the press. “But you cannot say that to the press,” Trump said. “The press is going to go with that, and I cannot live with that.”

Peña Nieto is not the only one saying no to Trump’s idea. Mexico’s former presidents, Vicente Fox and Felipe Calderón, have been pretty outspoken about their stance on the issue.

“I’m not going to pay for that f*cking wall! He should pay for it. He’s got the money,” Fox told Fusion, now Splinter News.

Along similar lines, Calderón told CNBC: “Mexican people, we are not going to pay any single cent for such a stupid wall! And they need to know that. And it’s going to be completely useless.”

A tax on remittances won’t pay for the wall

One way that Republicans proposed to pay for the border wall is by taxing the money immigrants living in the U.S. send back home. In March, Alabama Congressman Mike Rogers introduced the “Border Wall Funding Act of 2017.” Under the bill, all person-to-person wire transfers to Mexico, Latin America and the Caribbean would come with a 2 percent tax, according to NPR. For now, the bill is stuck in committees and has yet to be voted on.

Such a tax, or fee, would have to be close to 5 percent in order to raise enough money to pay for the wall, according to Alex Nowrasteh, an immigration policy analyst at the Cato Institute. He goes on to point out that this still wouldn’t work, because people would find different methods to send money back home that would avoid the tax, such as bitcoin or gift cards.

Last year, Mexico received $28.5 billion in remittances from all over the world.

The sun won’t pay for the wall

Yet another idea floated by Trump was putting solar panels along the wall.

“I’ll give you an idea that no one has heard about yet,” he said at another rally earlier this year. “We’re thinking of building the wall as a solar wall so it creates energy and pays for itself. This way, Mexico will have to pay much less money.”

When asked whether taxpayers should foot the bill, Republican Senator John McCain said: “Taxpayers are paying a lot of money right now. One of the biggest problems we have is the enforcement of existing law.”

American taxpayers do not want to pay for the wall, either. Let’s do the numbers:

Back in March, Wisconsin Congresswoman Gwen Moore proposed “No Taxpayer Funding for the Wall Act,” which would prohibit the use of federal funds for the border wall.

“I am not in favor of the wall, but if there is a wall, then I do not want the United States of America to pay for the wall,” Moore told CBS. The bill is currently stuck in committees and has yet to be voted on.