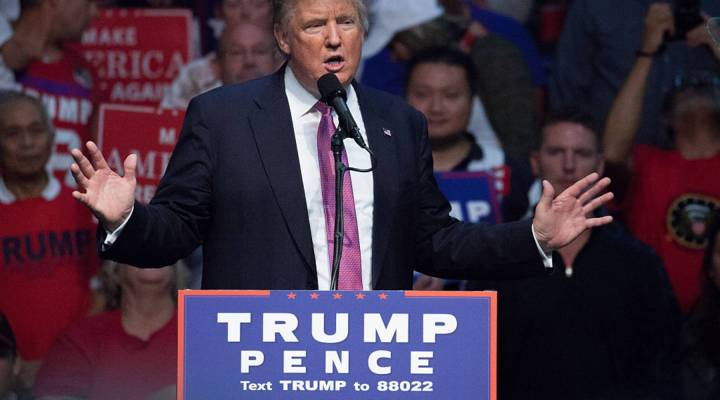 Update: After the press conference, Peña Nieto disputed Trump’s characterization of their meeting, saying he made it clear Mexico wouldn’t pay for a border wall.

In diplomatic circles the meeting today between Donald Trump and Mexican President Enrique Peña Nieto would be called a bilateral.

In political circles, it would be called, first of all, amazing. And second of all a great photo opportunity.

In economic circles, it was interesting, to say the least. Mr. Trump has made it clear that the key issues in his case for the White House include immigration and the construction of a border wall.

Marketplace’s Kimberly Adams was on the story today and spoke with Kai Ryssdal.

On what Trump and President Nieto spoke about:

They spoke about lots of things. Of course, lots about immigration, the topic of Mr. Trump’s speech tonight as you mentioned, they talked about crime and all of the traffic that goes back and forth across the border in terms of human trafficking, drug trafficking, money laundering and everything; they also talked about NAFTA which Mr. Trump, well here’s what he said about it:

Donald Trump: I shared my strong view that NAFTA has a been a far greater benefit to Mexico than it has been to the United States, and that It must be improved upon to make sure that workers and so important in both countries benefit from fair and reciprocal trade.

On what was said about the wall:

They covered the wall a little bit. But that’s just because some of the reporters were literally jumping out of their seats trying to ask about this wall and what they said about it….

Donald Trump: We did discuss the wall. We didn’t discuss payment of the wall. That will be for a later date. This was a very preliminary meeting.

Which is a little bit strange because the wall has been such a huge issue for Trump. From the very beginning of his campaign all up until now it’s been the wall, the wall, the wall. So it’s a bit surprising that, in this setting, he didn’t talk about who would pay for the wall. Because Trump has said, over and over again, that Mexico will pay for the wall. Which obviously, many Mexicans have a problem with.

On what was said about trade:

…Even though Mexico exports 80 percent its products to the United States, Mexico is the United States’ third largest trading partner and there’s investments on both sides. I was down at the border just earlier this year and there’s massive amounts of trade that goes back and forth every single day. And I think Mexico’s president was really trying to emphasize that the partnerships that exist right now are beneficial for both parties.