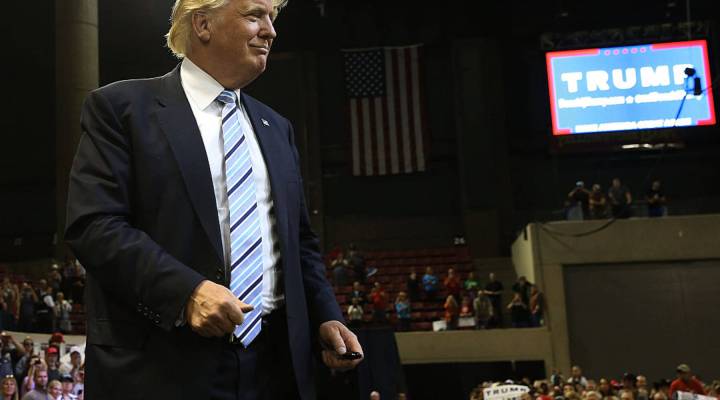 Republican presidential candidate Donald Trump motions to the crowd following a speech at a rally on May 26, 2016 in Billings, Montana.   Spencer Platt/Getty Images

Republican presidential candidate Donald Trump motions to the crowd following a speech at a rally on May 26, 2016 in Billings, Montana.   Spencer Platt/Getty Images

Immigration has been a big topic in this year’s presidential race and Republican candidate Donald Trump has not shied away from the subject. In fact, he’s said some pretty unpleasant things about Mexico and Mexicans, including his intent to build a wall along America’s southern border to keep them out. It’s important to both the U.S. and Mexico’s economy to allow people and goods to move across that very border. We sat down with Marketplace’s Kimberly Adams, who was down on the border a couple of months ago, to chat about how Mexicans are reacting to Trump’s visit.

On how Mexicans feel about Trump:

To put it mildly, the feelings are not very good. There is really nasty graffiti up on the actual border wall depicting Trump, there are Trump piñatas, and all sorts of things. Even officials there are pretty outspoken about how upset there are about what Trump has been saying about Mexico and Mexican immigrants, referring to some Mexicans immigrants as ‘criminals and rapists.’ The insults are one thing but there’s also this economic concern, for example Trump’s claim that he’ll make Mexico pay for this wall that he wants to build and it elicited these two responses from two former Mexican presidents:

Vicente Fox: I declare, I’m not gonna pay for that f**ing wall. He should pay for it, he’s got the money.

Felipe Calderon: Building a wall? Mexican people, we are not going to pay any single cents for such a stupid wall.

What Trump’s proposed policies on immigration would mean for the free flow of goods and people that go across that border everyday:

[Trade across the border happens] All the time, every day, all day, 24/7 and the economists I’ve asked about this say that the kind of proposals that Trump is putting forward would be bad for both economies. The vast majority of Mexico’s exports go to the United States and Mexico is our third largest trading partner. U.S. companies have billions invested in Mexico and Mexican investment in the U.S. is growing. So while a lot of people saying that limiting immigration would boost wages, trade groups in some sectors like agriculture say it would just be devastating to their workforce.