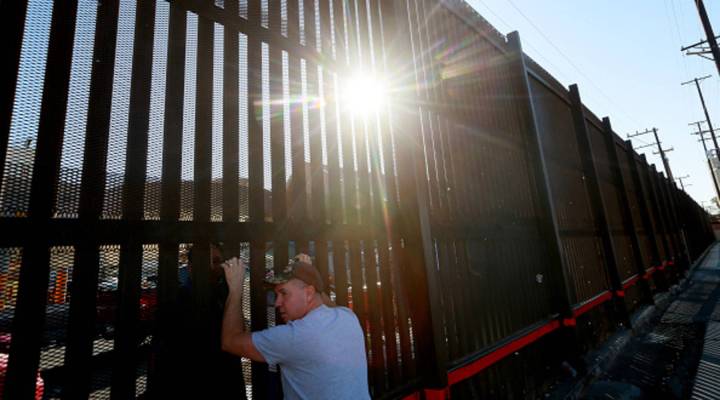 A man stands on the U.S. side of the U.S.-Mexico border wall in Calexico, California. (Sandy Huffaker/Getty Images)

A man stands on the U.S. side of the U.S.-Mexico border wall in Calexico, California. (Sandy Huffaker/Getty Images)

It’s been almost two months since President Donald Trump took office as the 45th President of the United States and so far, no construction has begun on the border wall that was at the core of Trump’s campaign. Yet local governments are already taking steps to sever their connection to companies that might end up working on the wall that Trump says will protect the border between the U.S. and Mexico.

“Our city is one that is known for breaking down walls, not building them,” said Berkeley Mayor Jesse Arreguin. “We will continue in that tradition regardless of what happens at the federal level.”

While Berkeley is the first city to pass such a law, similar proposals have been considered in San Francisco and Oakland, and in Illinois and New York states.

In January, two San Francisco supervisors, Aaron Peskin and Hillary Ronen, floated legislation that would prohibit the city from doing business with companies that have a hand in constructing the wall. Neighboring Oakland is also considering a boycott of such companies after councilman Abel Guillen introduced a resolution in February. In New York, similar statewide  was proposed by Assemblywoman Nily Rozic.

Probably the earliest such proposal came from Illinois, where just two weeks after Trump was declared president, Will Guzzardi, a state representative from Chicago, proposed legislation to divest the state’s pension funds and investments from companies that worked on the border wall.

Those bills have yet to come up for a vote.

It has not been decided which companies will work on the construction of the wall, but hundreds have already expressed interest.

While construction has yet to begin, there’s been a lot of talk about who will pay for the wall and who will build it. Trump’s administration initially expected to solicit bids to design and build the wall at the beginning of this month around March 6, but have since postponed the release of its formal request.

“Industry interest has been high,” the Department of Homeland Security said an update posted Tuesday. The department hopes to formally request bids “soon.” It is considering two kinds of bids: one for concrete designs and another for other designs.

At the beginning of the month, about 300 companies had expressed interest in helping build the wall. A CNBC analysis released on Thursday put the number at more than 600 companies. CNBC also found that at least 133 of the interested companies were owned by minorities, including 39 that were owned by Hispanics.

Among the companies expected to register as a potential contractor was Mexico-based Cemex, one of the world’s largest suppliers of building materials. But spokesman Jorge Perez told the Los Angeles Times that the company “will not participate” in building the wall. It will also not supply third-party contractors working on the project.