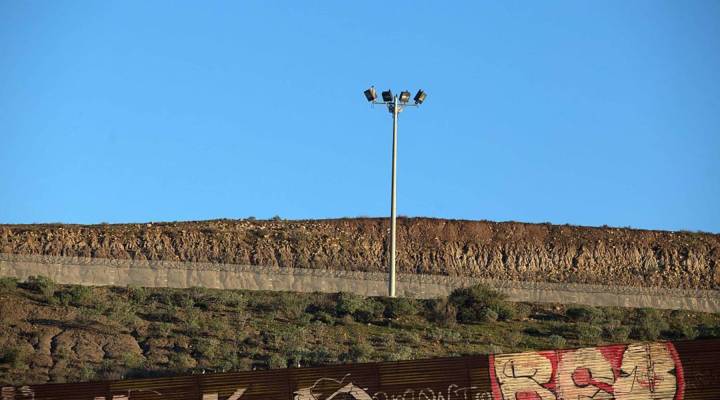 COPY
View of the border fence between Mexico and US taken from Mexico's side on January 25, 2017, in Tijuana, northwestern Mexico.    GUILLERMO ARIAS/AFP/Getty Images

View of the border fence between Mexico and US taken from Mexico's side on January 25, 2017, in Tijuana, northwestern Mexico.    GUILLERMO ARIAS/AFP/Getty Images
Listen Now

Another day, another couple of executive actions at the White House.

President Donald Trump on Wednesday took his first steps toward fulfilling some of the most controversial promises he made on his campaign.

One of them is to crack down on sanctuary cities, by which the Trump Administration means deny these places federal financing. The other, Trump said, is “to begin immediate construction of a border wall,” that would be the wall along the U.S.-Mexico border he’s promised.  And, to speed up the deportation of undocumented immigrants.

Marketplace’s Kimberly Adams is reporting along the border this week and spoke with Marketplace Host Kai Ryssdal about the president’s latest orders.

“We don’t know yet what he means by a ‘wall,'” Adams said. “Because most of the barrier in this area is some kind of fence — either a sheet-metal fence, or sort of, a very heavy duty chain-linked fence, or sometimes big, tall steel columns with a flat sheet of steel on the top. But there are ways people get over every single one of those types.”

And what do we know about how the president will fulfill his promise that Mexico is going to pay for this wall?

“Not much, actually,” Adams said. “And Mexico, and Mexican leaders, have been saying over and over again that they are not going to pay for this wall. President Trump has said that he is going to use existing funds from a Bush Administration era policy called the Secure Fences Act to, kind of, kick start the funding to build the wall. That means American taxpayers are going to be paying for the start of this process. But he promises that Mexico is going to reimburse us for the wall.”