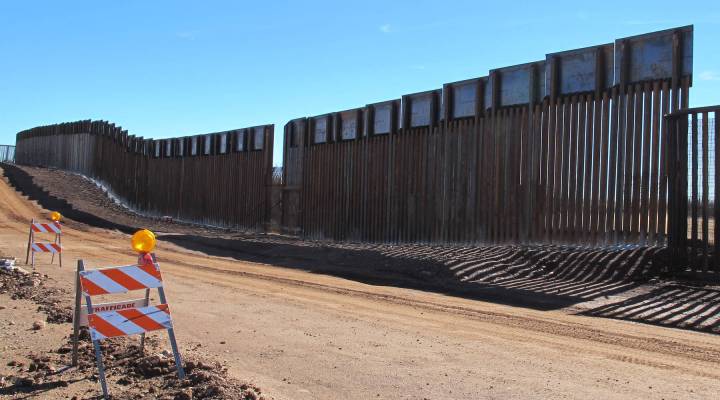 COPY
A stretch of wall between Nogales, Arizona, and Mexico. Kimberly Adams/Marketplace

A stretch of wall between Nogales, Arizona, and Mexico. Kimberly Adams/Marketplace
Listen Now

The Trump administration is moving ahead with efforts to build a border wall, even as questions about the financial and physical feasibility of the project remain.

Beginning next week, the Department of Homeland Security will begin soliciting bids to design and build wall prototypes, and well over 300 businesses have already expressed interest in taking part.

This “presolicitation” stage is something of a testing of the waters for the government, according to Myra Cisse of the Government Contractors Association, a group that works with businesses seeking government contracts.

“This is one of the early-on steps,” said Cisse. “We kind of call it a ‘market survey, where they’re going out checking to see who may be interested in the particular opportunity, who out there is qualified to deliver the scope of work.”

Hundreds of companies are interested, given that there could potentially be more than $20 billion of government spending attached to the program (despite Trump’s insistence, Mexico still says it won’t pay for the wall).

Businesses wanting a piece of the job include construction and logistics firms, technology companies, plus designers and architects. Several dozen Hispanic-owned businesses are hoping to get some of the work as well.

Angie Goral started Martinez Construction Services with her sister about 10 years ago and said her company has been working with partners to jump on the opportunity.

“We’ve been talking to them, trying to come up with some ideas of things that would be easy to install [along the border],” she said, “because some of these locations are very hard to get to, hard to get materials to.”

Goral believes her small project management firm with its staff of nine people has an advantage in that they already do work with several government agencies, including Customs and Border Protection, and the company has experience working on the border. Nevertheless, she knows the competition will be stiff.

“Realistically, there’s going to be some huge companies that go after this,” Goral said. “We can’t even compete with some of these guys…. But it’s worth a try.”

Whoever wins what would likely be many government contracts related to building a border wall, there will be no shortage of geographic, financial and logistical problems that need to be resolved before building can begin.

Plus, there’s the issue of land ownership.

“Only about a third of the border is actually controlled by the federal government,” said David Bier, an immigration policy analyst at the Cato Institute. “So we’re likely to see some serious pushback from property owners on the border who will fight in court seizures that take their land in order to build this wall.”

There’s historical precedent for that kind of negative response to eminent domain along the border. Presidents George W. Bush and Barack Obama tried to build more barriers along the border and saw their progress repeatedly blocked by landowners who didn’t want fences or walls on their land.

Denise Gilman, director of the Immigration Clinic at the University of Texas School of Law, studied the fallout at the time.

“When we last studied the impact of the border wall,” Gilman said, “we found that where private property was scheduled to be taken it was most likely to affect smaller Latino family property owners, rather than larger or more influential, more politically connected property owners.”

This time around, if Trump wants to build a wall along the entire border, the government would have to buy the land from everyone.