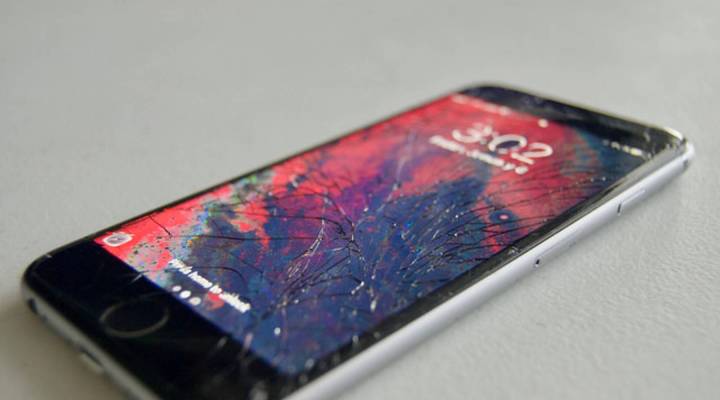 If you’ve ever owned an iPhone, there’s a good chance you’ve cracked the screen. And a 25 percent chance you did it in the first two years of owning your phone, to be exact.

Smartphone screen repair is a $4 billion business, Reuters reported today, and the service brings Apple between $1 billion to $2 billion in revenue a year.

That’s pocket change for the tech giant, but screen repair can be pretty expensive for the average consumer—Apple charges $129 or more for out-of-warranty screen repair on most phones. This has customers turning to the 30,000 third-party repair technicians serving that market.

“We can fix just about anything,” said AJ Forsythe, the co-founder and CEO of iCracked. Forsythe started off by repairing friends’ phones in his dorm room seven years ago, and now says he has a multimillion dollar company. The one thing iCracked can’t fix on the iPhone is the Touch ID, the proprietary technology that lets you unlock your iPhone with your fingerprint. Apple hasn’t shared the underlying technology with any third-party vendors, which means you still need Apple for that specific repair.

But now, the company is rolling out 400 of its “Horizon machines” to select third-party repair centers by the end of the year. The Horizon machine is a box about the size of the microwave that performs the Touch ID fix.

Gay Gordon-Byrne of the Repair Association, a trade group for technology repairers, says this doesn’t change a thing.

“Apple is the gift that keeps giving,” Gordon-Byrne said sarcastically. “Every time they are backed into a corner about something they’ve done that’s outrageously monopolistic, they do something that’s even more monopolistic.”

Gordon-Byrne argues that Apple should share the underlying technology behind the Touch ID, rather than rolling out a proprietary device to fix another proprietary device. This way anyone could do the repairs, with or without the Horizon machine.

“They just expanded their dealer network,” Gordon-Byrne said. “It’s just the auto dealership model with more dealers. It didn’t change anything for consumers.”

Apple declined to comment on the record for this story, but in past statements they’ve pushed back against opening up their technology on the grounds that it would open the device up to hackers.

“I don’t think that’s necessarily a genuine argument,” said Forsythe. “Anyone can open up their device and hack on it, people have been hacking on hardware for years. It feels more like a scare tactic than actual reality.”

Apple has also hired lobbyists to fight so-called “right to repair” legislation that would compel manufacturers to open up such proprietary technology to third-party vendors. New Jersey became the latest state to introduce such legislation on Friday. New York State Senator Phil Boyle has a “right to repair” bill in committee now.

“This is a multi-billion dollar industry,” Boyle said. “And [manufacturers] like the business. If I was a manufacturer and I knew you had to come to me for repairs, I wouldn’t let you go.”

Boyle also pushes back on the hacker argument.

Mike Levin of Consumer Intelligence Research Partners says that keeping repairs in-house—or with authorized technicians—is a smart business move by Apple. Whether or not customers or repair people like it.

“[Repair] is a nice little business for some of these folks and they’re gonna resent it,” Levin said. “But this is very smart of Apple to try to control the repair chain.”

The people who are buying iPhones are largely people who already own iPhones, he said. And customers are keeping their phones longer. The average age of a phone has grown by about 25 percent since the iPhone first launched, according to Levin.

“Apple needs to take care of those customers,” Levin said. “So not having them go to some sort of outside party helps them maintain quality, and maintain control over the customer relationship.”

But, “if you can’t get to an Apple Store, this might not be so good for you,” he said.