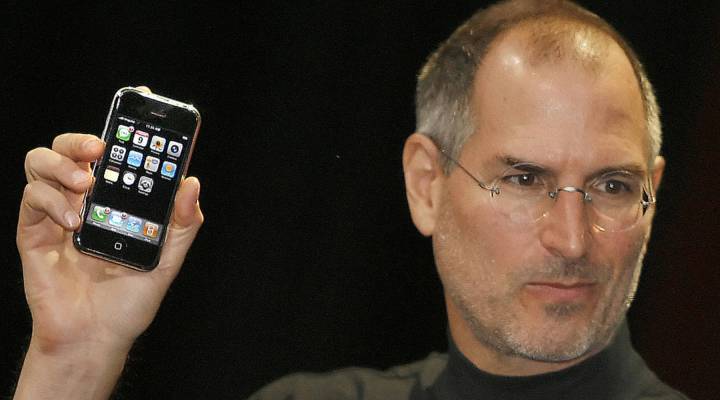 In the world of tech, Apple is a must-own stock, and depending on the day, the most valuable publicly traded company in the world. And there’s one device that played a big part in getting them there: the iPhone. Later this month will be the 10-year anniversary of Apple’s famous phone, and a new book coming out next week chronicles some of its super secret origin story and the internal battle over its design. We all know how the story ended, but Brian Merchant has the backstory in his book called “The One Device: The Secret History of the iPhone.” Merchant told Marketplace host Molly Wood a little about the iPhone’s secret history. The following is an edited transcript of their conversation:

Molly Wood: So what a fascinating story, especially for some of us who may have been covering tech for quite a while.

Merchant: Well, at the point when the designers and engineers started to really think about the interaction paradigm, which is really kind of ultimately what sets the iPhone apart, which is that it’s based on multi-touch and you’re touching. There weren’t a lot of consumer facing touchscreens out at the time. So they were really kind of answering this question of how do we want to interact with our devices?

Wood: Well, it sounds like internally, at least, at this sort of time of birth there were a couple of competing teams working on things, right? You had sort of Tony Fadell’s iPod-based model, and then you had what Steve Jobs wanted, which was a smaller tablet. Is that a fair characterization?

Merchant: Yeah, so it was this experimental project that was kind of waiting in the wings, but they decided that it just was too expensive, so they put it on hold. And then the iPod took off, and there was this business imperative that said, “OK, well, cell phones are getting smarter too.” And pretty soon people are going to be able to put music on their cell phones. So they were really worried about this prospect of cell phones eating the iPod’s lunch. So they decided to do one themselves. And then at the time the obvious answer was slap a phone onto the iPod. But in the development process, they really ran into a bunch of hurdles, because it turns out it’s really hard to make calls with a rotary click wheel.

Wood: What are some of the other reasons why that multi-touch approach, the sort of Steve Jobs vision, won out?

Merchant: Well, you know, you had a bunch of really smart people who’d been working together for a really long time. Once they saw, you know, this interaction paradigm where we went, “Wait a second. We can touch computers. We can play with data with our hands. We can do direct manipulation,” as they called it. They said, “You know what? We can turn this into a mobile computer.” So they basically kind of took that up, and it started looking like this really compelling, really exciting way to make a phone. And once the click wheel didn’t work, they kind of had this famous meeting where they were like, “You know what? There’s one of these two projects that we really want to do, and it’s pretty clear that this is the one that excites people, so let’s just do it.”

Wood: So tell me, what was life like for the engineers working on this project?

Wood: In 30 seconds or less, how miserable are we talking here?

Merchant: Let’s say very unpleasant. I’ve had it described as a soup of misery, as, you know, a lot of f bombs were dropped. It was chaos. It was round the clock. Only the people with security clearance could get in. And that meant very little got out, including, you know, dirty laundry and trash. So the trash was piling up. It stunk. There were shouting matches and slammed doors. And it really was intense.

Wood: And so then the iPhone comes out. It’s obviously so influential on the cell phone market. If Apple had not made this phone, if they had not gone in this direction with multi-touch and all of these interface designs, what do you think, can you speculate on what you think phones might look like now?

Merchant: Oh, man, it’s just so ubiquitous. We take it for granted. We see a screen without a keyboard. We assume we can touch, swipe, prod, poke it. If it hadn’t gone with multi-touch, maybe we’d all have these little tiny keyboards that we’d still be getting arthritis in our hands early from pecking away on. It’s it’s really hard to speculate.