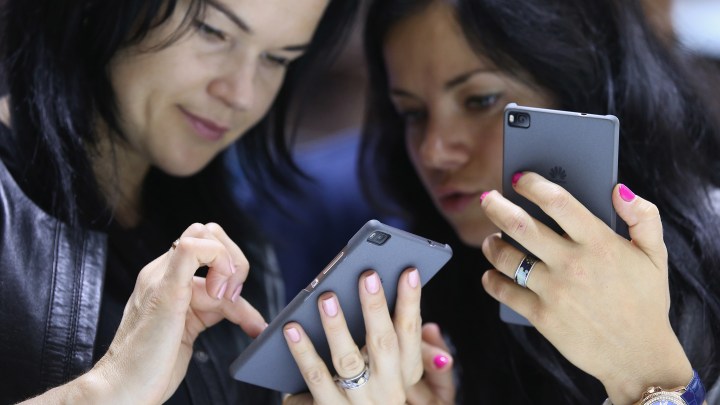 COPY
Visitors try out the Honor 7 smartphone at the Huawei stand during a trade fair in 2015 in Berlin. Sean Gallup/Getty Images

Visitors try out the Honor 7 smartphone at the Huawei stand during a trade fair in 2015 in Berlin. Sean Gallup/Getty Images
Listen Now

This weekend, Chinese tech giant Huawei won a potential reprieve from U.S. sanctions under the trade war truce declared by U.S. President Donald Trump and Chinese President Xi Jinping. This could allow Huawei’s smartphone manufacturing arm to keep purchasing U.S. technology and equipment. This matters because of one of the less-noticed details of the security and spying controversy surrounding Huawei: the Chinese company sells more phones than Apple.

In China, Huawei sold three times more smartphones than Apple in 2018. The company’s handsets in the mainland market sell at a discount to comparable iPhones and use Google’s Android operating system.

“I always use Huawei phones, as the camera is better and the battery lasts longer,” Duan Meng, an air-conditioning merchant in China’s tech capital of Shenzhen, said (full disclosure: Duan is a distant in-law relative of mine).

Duan said she uses her Huawei handset mostly to watch streaming videos; on this day she sits and snaps together small electronic circuit boards at a desk where her phone is propped up and showing a Chinese soap opera heavy on melodrama (at this moment a teary young woman on the screen proclaims: “I have a pretend life! I have a pretend wedding!”). She also pulls up a popular app for adjusting selfie photos.

It has all kinds of functions: face lengthening. Skin whitening. Chin sharpening.

In China, Huawei sells three times more smartphones than Apple. In Europe, each brand has about a quarter of the market. Many Americans missed the Huawei handset explosion, as the brand hardly sells in the United States given security concerns. But in a recent blind phone “taste” test conducted by Marketplace, the Huawei $1,000 P30 Pro ranked first in a lineup of eight phones. The P30 Pro’s camera received rave reviews.

“It has without question the best low-light camera capability,” analyst Avi Greengart at Techsponential said. “This will turn night into day if you want to.”

So how did Huawei’s phone division become so successful? Shenzhen tech historian and analyst Steve Dai spent 16 years at the company, which he said threw a lot money (from telecom revenue) and engineers at the problem.

“Huawei workers are like locusts,” Dai said. “They’re everywhere. Our product quality was worse at the beginning, but we made up for it in hard work. This is the company’s ‘wolf culture'”

“We put the fashion factor in,” Dai said. “Big screen. Better battery. Fingerprint recognition. And a metallic exterior that felt cool when you touched it.”

Huawei’s success began to spread inside China, then abroad, notably in Europe. The brand’s top-end phone sell for the same premium price as Apple and Samsung, but its lower-tier model are priced at a significant discount to comparable brands.

The question is, what happens now? The U.S. government, which had cut Huawei off from American technology, including Google’s Android operating system software, may give the company a reprieve under the new trade truce. When the U.S. first announced its sanction, Huawei stated its smartphone sales fell by 40%. But now analyst Greengart thinks Huawei could find a way to still thrive.

“I do think that a recovery is possible,” Greengart said. “There will need to be a major marketing campaign. They will probably try to spin this as a Trump trade negotiating tactic.”

That is, to make the case that Huawei is an innocent victim of the Trump administration. That is the widespread view in Shenzhen, Huawei’s home city, where residents often remark that Huawei’s logo resembles a sliced-up apple.