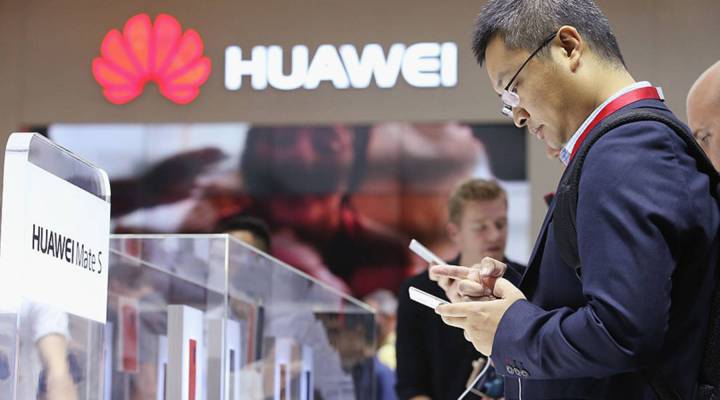 It is officially new iPhone season for techies. Apple usually announces its new phones in early September, and rumors about the gadgets are already flying. But earlier this month, the Chinese phone maker Huawei became the second-largest phone manufacturer in the world by market share. Samsung is No. 1. That’s a big deal because Apple needs to sell lots of high-end phones in China where Huawei dominates and because Huawei got to No. 2 in the world without even selling phones in America. Most Chinese-made phones are unofficially banned because of government security concerns. Ryan Reith keeps track of the mobile phone industry at research firm IDC. He spoke with Marketplace Tech host Molly Wood and said Chinese phone makers are getting increasingly powerful. The following is an edited transcript of their conversation.

Ryan Reith: I think it’s very clear when you look at Huawei. But not only them. If you look at basically the next three vendors as well, which would be, as of the last quarter, Xiaomi, Oppo, and Vivo, Chinese [original equipment manufacturers] as well. These are four of the top six companies that are all doing very well. They’re growing market share. They’re moving into new markets and they’re all nonexistent in the U.S. So I think those companies prove that they can operate and grow globally without the U.S. But, having said that, we still do believe that the U.S. is clearly a very important market.

Molly Wood: Well then, how about the China market? Apple, for example, is clearly not in trouble, but there are suggestions that China and other emerging markets are really important to their future growth because the U.S. smartphone market, that pace of upgrading has slowed. Could those markets be getting sewn up by Huawei and Xiaomi and the other Chinese manufacturers?

Reith: Yeah, China is a very important market. No. 1, because it represents a third of the world’s phone consumption and most phones are actually manufactured there. So it’s a very important market for technology and certainly smartphones. It’s a very important market for Apple. What’s helped them is the fact that their target audience in China has been very limited to the Tier 1 cities, and even within that, a very select audience — those with the disposable income that goes towards premium products. So they’ve done very well there. And typically that premium section doesn’t always decline in the same sort of ways that you see the mass market, which is a lot of low-end there because that’s sort of more economy-driven than the top of the market. So they’ve fared fairly well. They’ve remained in the top five.

Wood: What companies should be most worried about the rise of these Chinese OEMs and Huawei in particular?

Reith: I think Samsung. What we’ve seen is that they’re selling more low-end phones than they were five years ago, with significant differences in terms of our research. So the lower you go, usually the lower the margins means you don’t make as much revenue. So I think they’re already feeling the pressure, and I don’t think this is just coming from Huawei. I think it’s actually probably coming more from some of these other guys that I’ve mentioned a few times.