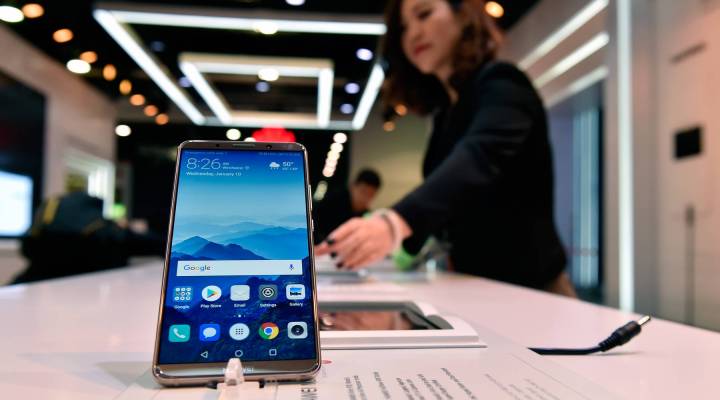 This page was updated on May 16.

President Trump is banning U.S. companies from using telecommunications equipment made by foreign firms it deems a threat to national security.

While the White House hasn’t explicitly identified the Chinese electronics giant Huawei as the intended target, the U.S. Commerce Department has added Huawei to a trade blacklist that will ban it from buying parts and components from U.S. companies without government approval.

Huawei has long been a sticking point in U.S.- China relations.

Back in December, an executive from the Chinese electronics giant Huawei Technologies faced extradition to the U.S. after getting arrested in Canada, further complicating the relationship between the U.S. and China.

Meng Wanzhou — Huawei’s chief financial officer — was accused of trying to evade U.S. trade sanctions on Iran. But China’s government argued that she hadn’t broken any U.S. or Canadian laws, and demanded that Canada “immediately correct the mistake” and release her.

Here’s a snapshot of what you need to know about the electronics company.

1) The U.S. says Huawei is a national security threat

The U.S. government came to this conclusion after an 11-month investigation into the company and its rival ZTE Corp. back in 2012.

“China has the means, opportunity, and motive to use telecommunications companies for malicious purposes,” a government report said.

One congressman said companies that had used Huawei equipment reported “numerous allegations” of unexpected behavior, including routers that were sending large data packs to China.

Following the report, the U.S. eventually banned Huawei from bidding for U.S. government contracts. And earlier this year, the heads of six major U.S. intelligence agencies (including the FBI and the CIA) warned citizens not to use their products and services.

Despite America’s warnings and refusals from major carriers to sell its phones, Huawei’s smartphone business seems to be doing just fine for now.

Huawei has the second-largest share of the global smartphone market, beating out Apple.

In the second quarter of the year, it sold around 54 million smartphones — about 15.8 percent of the global market.

3) Huawei is involved in the development of 5G internet networks

Aside from their smartphones, Huawei also makes laptops, satellites, chips and — most controversially — equipment for 5G networks.

They’re involved in the development of these networks around the world, BBC journalist Will Bain told us. 5G could run what’s called “the internet of things,” so think smart heating, smart traffic lights and autonomous vehicles.

Huawei’s involvement in 5G has compounded security concerns over the company even further.

“We know from the Chinese government that they want Chinese companies to share intelligence with the government, and therefore that’s a real problem for other countries around the world who do not necessarily want their telecommunications systems piped straight into Beijing,” said Stephanie Hare, an independent technology analyst.

4) Western governments have started to take action against the company

Given these security concerns, Australia banned Huawei earlier this year from being involved in building out its 5G infrastructure network, with New Zealand following suit.

The head of the U.K. intelligence agency MI6 also said the U.K. needs to decide if it was “comfortable with Chinese ownership of these [5G] technologies.” BT, a British telecommunications company, announced this week that it’s not using Huawei’s equipment in its 5G network and  that it’s removing the company’s equipment from key areas of its 4G network.

5) Huawei has courted U.S. celebrities to soften its image

In an unexpected partnership, Huawei teamed up with the Jonas Brothers following America’s claim that they’re a national security threat. The Chinese company sponsored a 27-city tour of theirs back in 2013.

The Israeli actress Gal Gadot also became the company’s U.S. brand ambassador for its Mate 10 Pro smartphone, an announcement that came after AT&T pulled out of a deal to sell Huawei’s phones.

The electronics giant is doing well with smartphone sales outside of the U.S., but they, of course, could be even bigger if they were able to tap into this market.