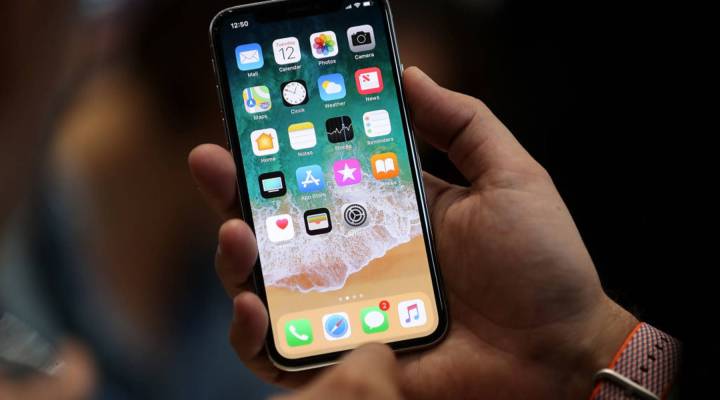 COPY
IPhones make up most of Apple's business. Above, the new iPhone X was unveiled today at the Steve Jobs Theater on the Apple Park campus in Cupertino, California. Justin Sullivan/Getty Images
Marketplace Tech Blogs

IPhones make up most of Apple's business. Above, the new iPhone X was unveiled today at the Steve Jobs Theater on the Apple Park campus in Cupertino, California. Justin Sullivan/Getty Images
Listen Now

IPhone events cause a lot of hype, even though Apple released its first 10 years ago. The product has become the showpiece of the company, making up most of its business. Apple has made more than $730 billion from selling 1.2 billion iPhones since 2007. This is revenue from the physical product alone — it doesn’t include money that the iPhone helps generate through apps. And with the $999 iPhone X, analysts expect quarterly revenue to increase.

But the iPhone wasn’t just a game changer for Apple. It shifted how companies look at the market, even those that were seemingly far away from phone technology.

“We thought of it as the phone business. We aren’t in the phone business,” said former Intel President Renee James, speaking to Fortune Magazine in 2014. “What we didn’t fully appreciate about the iPhone was the advent of small, general purpose computing.”

Increasingly, smartphones are replacing home computers. We read emails on them and perhaps edit spreadsheets on the go. But bigger industries have jumped from computer monitors to smartphone screens. A 2015 Mobile Ecosystem Forum report showed that 69 percent of mobile users have banked via phone. And that’s likely to have increased since features like mobile deposits have become more common.

Whether they liked it or not, companies had to cater to smartphone users to not just excel, but stay alive. Even Mark Zuckerberg underestimated the role phones would play in Facebook’s trajectory.

“I mean, last year, second quarter, we had basically no money from mobile,” he told TechCrunch in 2013. “Now it’s in our last quarter, a year later, more than 40 percent of our revenue is mobile.” In other words, the mega company Facebook even took a while to figure it all out.

But 10 years and a bunch of trial and error doesn’t mean all companies understand how to make money in this market.

“There is still so little that’s been done relative to the potential,” said Brian Wieser, a senior analyst at Pivotal Research. “Most large categories of marketers haven’t figured out the best ways to use mobile marketing.”

Experts say that by 2021, app development could be a $6.3 trillion market.

“I can think of Uber, Lyft, Spotify, Shazam, Twitter, Snapchat. These are companies that probably would not exist to the degree they have without the iPhone,” said Charlie Anderson, a senior analyst at the investment bank Dougherty and Company.

Are there worlds that smartphone and app developers have yet to explore? Of course, Wieser said.

“I’m looking at my coffee right now. Maybe there’s an app to tell me if my French press was brewed correctly by using a sensor,” he said.