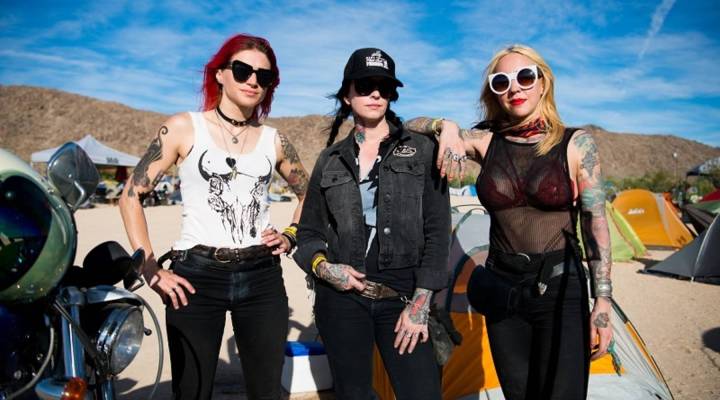 When Anya Violet decided to start an apparel line aimed at female motorcyclists, she said some people told her there wasn’t a market for it.

“That’s not true at all,” Violet said, the co-founder of Long Beach-based Atwyld. “Now, more than ever, women are hopping on two wheels.”

Her brand offers stylish armored shirts and Kevlar-lined leather jackets. Violet, a former design director at surf-and-skate clothing line RVCA, said the response from ladies has largely been “thank you.”

Women riding motorcycles is nothing new — they’ve been doing it in the United States dating back to at least 1940. But until recently, women riders say they were fitting themselves into a man’s world. They spent thousands of dollars altering bikes to fit their bodies — lowering them, moving seats, adjusting foot pegs. When it came to apparel, they felt much of the options were just smaller versions of men’s clothing.

Atwyld, an apparel brand that launched this year, is geared toward the fastest-growing segment of motorcyclists — women.

Ridership among women grew from 18.4 percent of all riders in 2003 to 24.6 percent in 2014, according to the latest numbers from the Motorcycle Industry Council. Bike manufacturers are responding by offering lighter and customizable bikes. Kawasaki recently debuted an “ergo fit” feature for its bike, the Vulcan S. A woman under 5 feet 6 inches tall could comfortably ride it.

Harley Davidson, which has the largest share — about 60 percent — of the female market is trying to get more women in its stores. It’s devoting market research and tailoring events, such as women-only “garage parties” and women-only training courses, according to spokeswoman Maripat Blankenheim.

“What we’ve heard is that the women’s classes can be hard to get into because they fill up,” Blankenheim said.

Harley Davidson is also hitting social media to reach the fastest-growing group of female riders, millennials. The company is partnering with female riding collectives, such as the Throttledolls and the Litas, which have followers that span the globe.

Instagram was also pivotal for Babes Ride Out, a well-known event within the female riding community. The event started in 2013 when Violet and some friends decided to do a campout with other female motorcyclists in Borrego Springs, California. They posted a flier on Instagram, thinking maybe a dozen ladies would show up.

“There were 50 women from places all over,” Violet, 31, said. “Some women shipped their bikes from New York. We were blown away.”

Attendance doubled each year. The last one in October had 1,600 women.

“If you told me four years ago this was going to happen, I would not have believed you,” Violet said.

The East Side Moto Babes, a women’s riding club in Los Angeles, meets up regularly. Founder Stacie London believes they were one of the first female-only groups to start in LA.

Stacie B. London, 44, calls social media a “cultural game changer.” She uses Instagram to get the word out on her club’s meetings and events, and said it expanded the club’s reach. London started the female riding club East Side Moto Babes in Los Angeles in 2010 — long before the motorcycle industry began to take female riders seriously.

“There wasn’t a female club in Los Angeles,” she said. “I was hanging out with male clubs … I thought ‘I can’t join their club, I might as well start my own.’”