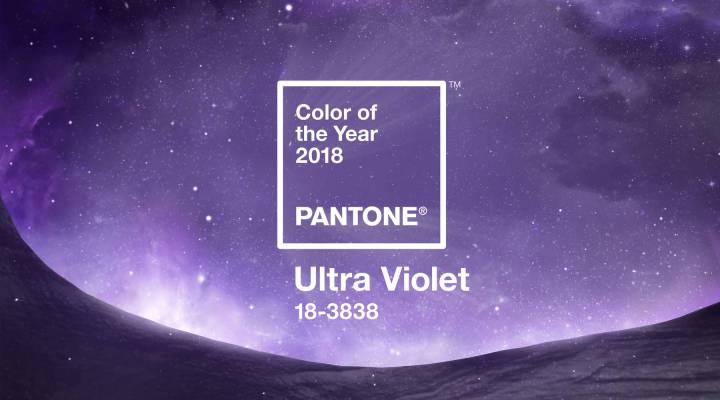 COPY
The Pantone Color of the Year: Ultra Violet.  Courtesy of Pantone

The Pantone Color of the Year: Ultra Violet.  Courtesy of Pantone
Listen Now

Pantone has picked its color of the year for 2018; it’s a vibrant shade called Ultra Violet. Aside from being a pretty bright purple that might become a design trend in 2018, this color has deeper meanings that could speak to our current political moment. Kassia St. Clair is a design journalist and author of the book “The Secret Lives of Color.” Marketplace’s Amy Scott spoke to her about the history behind this shade of purple. The following is an edited transcript of their conversation.

Amy Scott: Tell us what this company Pantone is, what do they do exactly?

Kassia St. Clair: So Pantone is just a vital tool for professional designers. They use alphanumeric codes for lots of different shades and they provide color books for fashion designers and also for graphic designers so that people are speaking the same color language. And it makes it much easier to identify different shades over long distances without using the names because the names can sometimes mean very different things to different people. So instead of saying, “it’s a little bit bluer than this shade and maybe a little bit more orange than this,” you’re saying, what I’m talking about is color, in this case Ultra Violet color code is 18-3838. And if you’re anywhere in the world you can find that particular chip, and you know exactly what we’re talking about.

Scott: So I know we’re not supposed to call 2018’s color of the year purple. It’s a form of violet, right? How would you describe this particular shade?

St. Clair: Well, it’s very much on the bluer end of purples and violets. Think about them as a family, so classically purples are kind of quite red-toned and Ultra Violet, the 2018 Pantone color of the year, is very much a bluer color. And it’s quite reminiscent of 1970s 1980s purples and violets I think.

St. Clair: I’m sure there is. Purples in general and violets and all different shades of the purple family have actually a very long history with rights movements. So the very first kind of feminist flag in Britain with the suffragette movement actually contained three colors, one of which was purple, the other two were green and white. And various other shades of purple have also been associated with protest movements and the fight for rights for minority groups. So I’m definitely sure that this color has got a long history of being used to help advocate for different groups and women in particular.

Scott: I couldn’t help but wonder if it was a nod to the cultural moment and feminism. There’s a feminist group advocating against sexism online called UltraViolet. Do you think there’s any nod there? Why do you think a company would make such a political choice, is that risky?

St. Clair: I think, obviously, it’s an American company and purple for me feels politically significant particularly in an American context. It’s the blending of the red and the blue, the Republican and the Democrats colors. And wouldn’t that be a wonderful thing to see a more unified messaging, rather than the divisive politics. It would be wonderful to see more blending of opinion and more coming together. So perhaps it is an optimistic message from a particularly American viewpoint. Although I think worldwide it has less of that resonance.

Scott: So as someone who spends a lot of time writing and thinking about colors and the role that they play in our culture, what is your prediction, what color would you say is going to be the most popular or prominent in the coming year?

St. Clair: I, personally, still think that green has a long way to go. I think that environmental concerns are very much part of the conversation. But of course Pantone, it’s a global firm, and they’re looking at a very wide range of factors that bleed into this choice of the color of the year. This choice is about making people think about color and giving a time for people to realize it’s importance or to really consider it. Perhaps you know people don’t spend a lot of time doing that, and as someone who loves color, as you say, I’m delighted when it becomes part of the conversation. People think about it and people start to really appreciate its importance in our everyday lives.