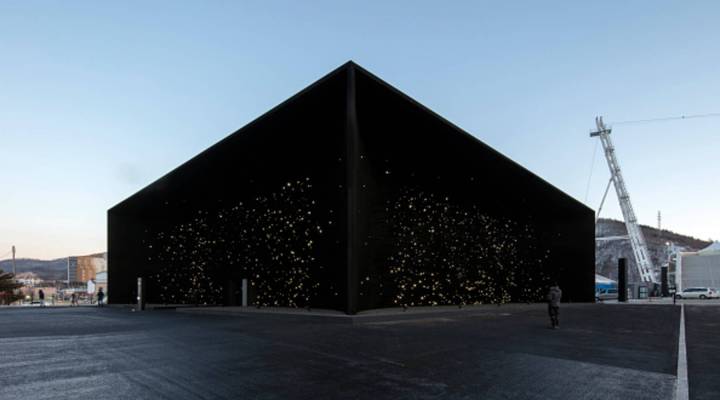 COPY
The Hyundai Pavilion at the Pyeongchang Winter Olympics in South Korea, designed by Asif Khan, is coated with Vantablack VBx2. Luke Hayes

Among the skating rinks, the bobsled tracks and the ski slopes of the Winter Olympics in Pyeongchang stands something completely different — what’s being called the darkest building on the planet. It’s a pavilion sponsored by Hyundai painted with a high–tech new color that its maker says is the world’s darkest man-made substance.

Kassia St. Clair is a London-based design journalist and the author of the book “The Secrect Lives of Color.” Marketplace host Kai Ryssdal talks with her about this new material, Vantablack VBx2. An edited transcript of their conversation follows.

Kassia St. Clair: So the VBx2 is kind of a spinoff of the original product, which is called Vantablack. And Vantablack is this incredible ultra-black nano structure that can be kind of grown on to various different surfaces. The VBx2 is a kind of spray-paint version. And what this allows people to do is to apply it over a much wider area, and it’s a little bit more user friendly, I guess you’d say, but the effect is the same. It’s this incredible, very deep matte ultra-black that absorbs over 99 percent of available light.

Kai Ryssdal: So there is this pavilion, this building at the Olympic park in Pyeongchang. What are they doing with it? And the flip side then is it’s not like I’m going to use this to paint my bedroom, right?

St. Clair: Not yet. VBx2, while it is much more user friendly, as I said, it’s still a little bit of a tricky thing to work with. And I know the team who’ve created this one pavilion have had all sorts of technical difficulties trying to make it last and give the effect for the full sort of six-week period that the pavilion will be up. But the pavilion itself is designed by this architect called Asif Khan, who is a British architect, and his term was as punctuation, particularly when we are sort of surrounded by light and kind of almost bombarded by it, you know, 24 hours a day. By its absence, we can create this sense of wonder and magic around light.

Ryssdal: The Olympics, being I guess is commercialized as they are nowadays, we have to point out that Hyundai is sponsoring this pavilion in order to promote, like, a fuel-cell powered car or something, right? I mean, there’s there’s commerce behind this.

St. Clair: Oh, yeah, absolutely. I think when you hear about something that is ultra-black, it’s very, very hard to conceptualize it. I myself have seen a very small sample of it just on a piece of tin foil in a lab where they created it in south of England. Yes, you immediately think what would this be like sort of on a larger scale. But it is very difficult to wrap your head around it. It’s a very uncanny material because it plays with your sense of depth perception because you can’t see exactly how close or far away the material is. So it’s really quite an incredible thing to see that at such a large scale.

Ryssdal: Kassia St. Clair, you’ve heard her elsewhere on the program. Her book is called “The Secret Lives of Color.” She is also a design journalist. That was lovely. Now I want to see this stuff.

St. Clair: I’m desperate to go out and see it. I follow the creator on Instagram, and he has been out in Korea taking lots of videos and things. And it’s just the most astounding thing to see at that scale even through my iPhone screen. 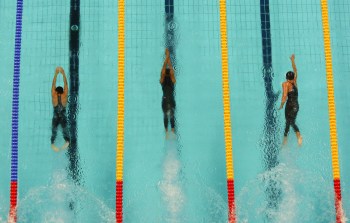