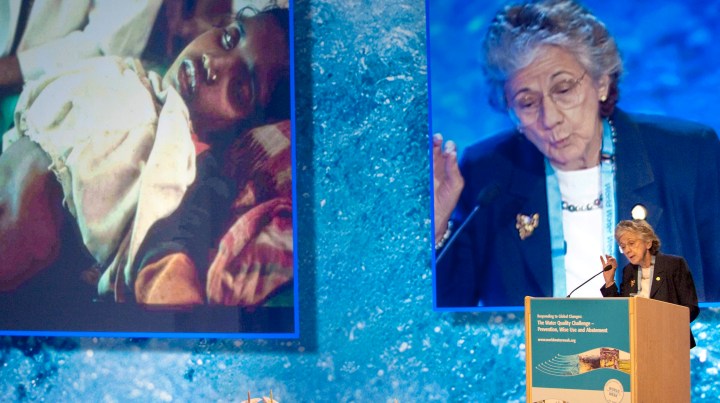 Microbiologist Rita Colwell is best known for her pioneering research on cholera. Colwell, also the first female director of the National Science Foundation, co-wrote a new book about her decades of experience fighting against sexism in the worlds of academia and science. The following is an excerpt from “A Lab of One’s Own: One Woman’s Personal Journey Through Sexism and Science” by Rita Colwell and Sharon Bertsch McGrayne. You can hear Colwell’s interview with Marketplace host Kai Ryssdal by clicking the media player above.

Congress had excluded white-collar professionals from the equal pay for equal work provisions of the Equal Pay Act of 1963 and the Civil Rights Act of 1964. Three years later, however, President Lyndon B. Johnson issued Executive Order 11375 prohibiting federal contractors from discriminating against women when hiring. Researching the subject, Sandler spotted a footnote. “Being an academic,” she said, “I read footnotes, so I turned to the back of the book to read it.” And there, Sandler found a way forward for women like herself: by taking federal funds, the University of Maryland (and all research universities receiving federal funding) had become a federal contractor. “It was a genuine Eureka moment,” Sandler later wrote. “I actually shrieked aloud.”

Working with the Women’s Equity Action League, a small Ohio group focusing on economic and legal issues with educational institutions, Sandler filed a class action suit against the University of Maryland and 250 other American colleges and universities. She based many of the cases on evidence of bias in hiring, tenure decisions, promotions, and salaries sent to her by women from all over the country. Although Sandler would win some of these lawsuits, the lack of enforcement powers in Johnson’s executive order muted her victories. There were no penalties for the offending universities to pay or procedures put in place to reverse the inequities. Thankfully, the story didn’t end there.

Instead, the issue of employment bias moved quietly to Congress, where Representative Edith Green, an Oregon Democrat and former schoolteacher, was passionately interested in women’s equality in education. Having accumulated enough seniority to chair a House subcommittee on education, she held hearings on sex discrimination in academia. Then Green made a savvy move: she moved the legislation that would come to be known as Title IX through Congress so stealthily that almost no one—not the men who voted for it nor the educational establishment that would be tasked with carrying it out—knew what was happening.

Quietly organizing her forces, Green hired Sandler to coach her staff about gender discrimination in academia, while Vincent Macaluso, a sympathetic federal expert in the Department of Labor, provided secret advice on strategy. Morag Simchak, also from the Department of Labor, drafted an amendment so forbiddingly technical that she knew no one would even attempt to read it. Sandler reported tongue in cheek that Simchak, “having informed her superiors once about her work on drafting the amendment, did not feel any great need to inform them again.” Several months later, Green, without informing her colleagues in the House of Representatives about the implications of what she was doing, slipped Simchak’s short passage banning sex discrimination in any educational program receiving federal aid into what would become the Educational Amendments Act of 1972. Once the passage was in the bill, Green ordered the leaders of women’s groups not to lobby for Title IX of the act. She didn’t want to alert the men in Congress to its importance. And so, still happily oblivious to what Title IX meant, Congress made it illegal to discriminate against women in education and gave individual women the power to sue universities in order to hold on to their jobs, protest tenure or employment decisions, and demand equal pay.

The university athletic establishment considered the Educational Amendments Act of 1972 “a very minor bill,” Sandler would later explain. The word “sports” was not even in it. A month later, Jonathan Spivak of the Wall Street Journal broke the real story under a masterfully understated headline: “Sex-Bias Section Could Spark Controversy.”

Worried about losing federal funds, university lawyers promptly ordered some quick fixes. Old-style anti-nepotism bans against hiring faculty wives gave way to modern prohibitions against relatives supervising relatives. Almost overnight, a few leading scientists were leapfrogged three steps up the academic ladder, from research associate to professor, including two women mentioned in the previous chapter— Violet B. Haas, the brilliant mathematician in Purdue’s engineering department, and Dora Priaulx Henry, the barnacle expert at the University of Washington — and several accomplished research associates at Harvard. Thousands of women suddenly received big pay raises, often without explanation and generally without back pay. For the first time, educational institutions had to publicly advertise job searches, end gender quotas for admission to graduate and professional schools, and pay equal stipends for male and female graduate students — although white men continued to get prestigious research assistantships while women and other groups underrepresented in science continued to receive less-prestigious teaching assistantships.

Above all, Title IX allowed us to believe change was possible. But those of us who also hoped Title IX would take care of sexism in science were soon dismayed.