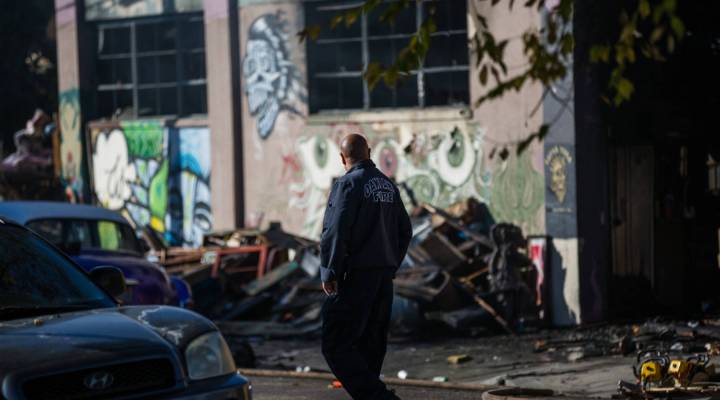 COPY
A fireman walks by the fire-ravaged warehouse in Oakland where at least 36 people have died. NICK OTTO/AFP/Getty Images

A fireman walks by the fire-ravaged warehouse in Oakland where at least 36 people have died. NICK OTTO/AFP/Getty Images
Listen Now

Authorities in Oakland, California caution that the number of casualties in Friday’s concert fire could rise significantly. Thirty-six people who were in the warehouse are known dead. The building was dubbed the Ghost Ship, a structure where some people reportedly lived amid makeshift electrical gas and plumbing lines.

The investigation has only begun, but there are already discussions about Silicon Valley-driven real estate prices that drive some residents into marginal structures.

KQED reporter Sam Harnett joined us from Northern California to talk about the area’s high cost of living.

On the struggle to find affordable housing:

I think there’s not really a great solution on the table. You’re seeing gentrification, you’re seeing families get pushed out. Oakland has seen massive change in the last decade for the first time in years. This place, Fruitvale, was on the BART line, which is the transportation network out here, and that made it ripe for gentrification. So you’re seeing a lot of people move in and the prices continue to go up, and there’s not great places for people with families to live and there’s not great places for artists to have space to be creative and have a place to live.