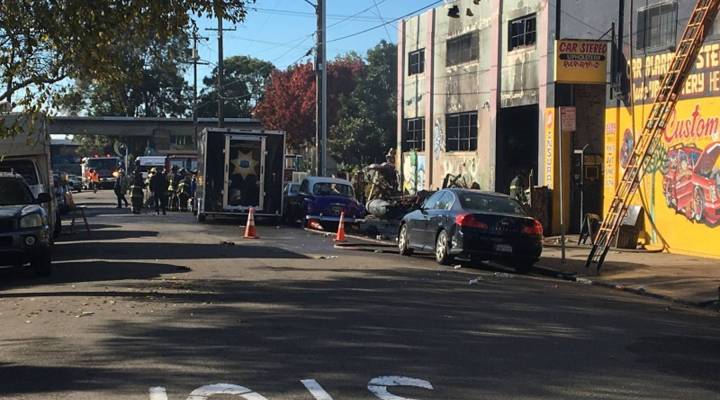 The Oakland warehouse fire that killed 36 people in early December has also highlighted the San Francisco Bay Area’s housing crisis. Supply hasn’t kept up with demand, thanks in part to Silicon Valley’s tech boom. In Oakland alone, rents have gone up 70 percent since 2007. Now, some people who live in makeshift housing fear they may be evicted, due to concerns about fire safety.

Angela Scrivani is an artist who lives on a tight budget. She said she can afford the Bay Area because she lives there in a warehouse where she also works.

“It’s a large open warehouse space. We have a wood shop area and welding shop area that are both distinctly separate,” she said.

Angela Scrivani is an Oakland artist and event planner currently living in a warehouse.

Since she moved in eight years ago, she said there have been three fire inspections. But the building is not zoned residential. There may be thousands of unpermitted units in Oakland where people live and work.

She was talking about people like her. She said the property owner, who did not respond to requests for comment, wants her to move out.

Scrivani is not alone. A few days after the fire, worried residents packed Oakland City Hall to ask for a moratorium on evictions. At the meeting, artist Colin Creveling pleaded with city council members to work with residents and property owners to make warehouses safer.

Oakland Councilman Noel Gallo said first the city needs to get a handle on how big the problem is.

“We are not here to displace anyone,” Gallo said. “But at the same time this is a public safety issue that I need to be accountable for, as well as all the rest of us.”

But that will take time. Joe Tobener, a tenants’ rights lawyer in the Bay Area, points out Oakland has a lot of work to do.

“Oakland code enforcement is way behind other cities in enforcing safe housing rules,” he said.

In the wake of the tragedy, some people who have fire safety expertise are offering to help the artists’ community do upgrades under the radar so that residents of warehouses and other spaces can make improvements without fear of eviction.