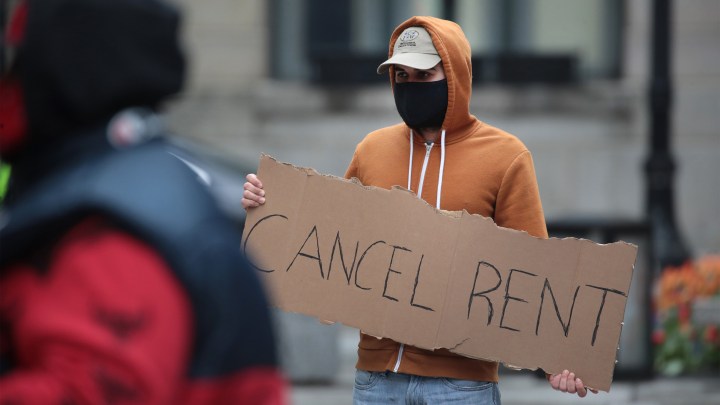 COPY
A demonstrator in Chicago on Thursday calls for rent and mortgage payments to be suspended to help those who have lost their income due to the coronavirus. Scott Olson/Getty Images
COVID-19

A demonstrator in Chicago on Thursday calls for rent and mortgage payments to be suspended to help those who have lost their income due to the coronavirus. Scott Olson/Getty Images
Listen Now

For the last two months, Mark Osgood from Chicago said he has not been able to pay rent. He’s 32, an Uber driver, and says work has dried up due to the virus. He said neither his stimulus nor his unemployment checks have come in yet.

“I mean, I live paycheck to paycheck as it is,” he said. “And if there is no income coming in, there’s no bill money going out.”

Today is May 1, rent is due, and he said he won’t be paying. Neither will many others — there are rent strikes across the country today, as a response to job losses and economic damage from the pandemic. Worker rights activists across the country are also calling for a day of action to bring attention to workplace issues around COVID-19.

Illinois, like New York, has frozen evictions, but Osgood pays over $1,300 a month and said he won’t be able to pay the rent backlog once the moratorium is lifted.

Some organizers of the rent strikes nationwide are asking those who can still afford rent to join people like Osgood and withhold payment. Advocates want rents to be canceled until people can return to work safely. Nicole Deane of the Alliance of Californians for Community Empowerment said that without additional protection once eviction moratoriums are lifted, “there would be mass evictions in California, after the pandemic, or tenants would potentially be tens of thousands of dollars in debt.”

The last time there was an organized rent strike at this level was in Harlem in the 1960s. Georgetown University assistant professor Rosemary Ndubuizu said these were focused on race and the dire living conditions for people of color.

“They were getting increasingly frustrated because the housing code that New York had was not getting enforced, particularly for black families,” she said, adding that these protests, which were organized primarily by African American women, were initially successful and spread to places like Washington, D.C.

Landlords today are warning that a rent strike could ripple through the economy. Doug Bibby, the president of the National Multifamily Housing Council, said he understands renters’ situation but “that big, bad landlord has a mortgage and has a payroll. And when you stop paying, they’re gonna start cutting people who look just like the people calling the rent strike.”

Instead, he said the federal government needs to help renters directly, beyond a one-time stimulus check. Otherwise, he said the housing crisis will get worse.

For many, it already has. Terra Thomas, a freelance florist in Oakland, California, said she’s had to make a decision whether to pay the monthly $900 for her rent-controlled apartment or keep paying for food and health care.

“I grew up in the Bay Area. This is my home. And if I lose this apartment, I don’t make enough to afford a place at market rate. And that, is … yeah it’s really scary,” she said.

She’s chosen to pay for food and health care and to strike on rent.