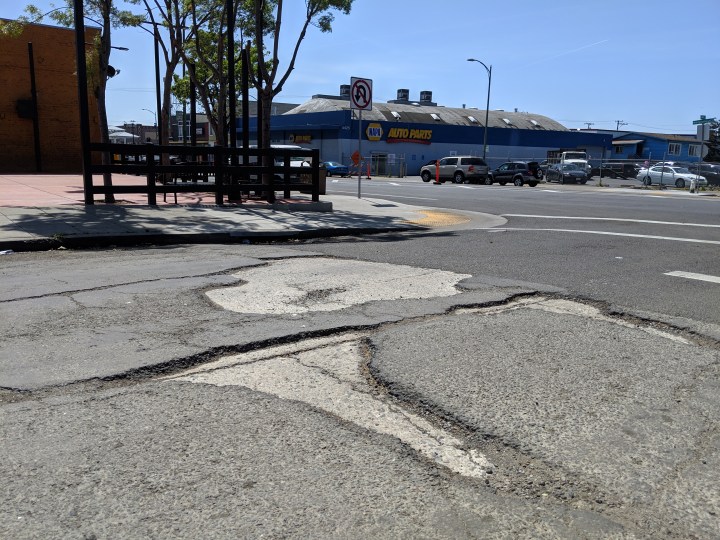 Every city must contend with potholes, but some of the streets in Oakland, California, look like they’ve survived the climactic fight in a superhero film.

“Some of them [potholes] are big enough that, if it rains my little great-nephew can swim in them,” says Tracy Greene, a resident of East Oakland.

In another neighborhood, Fruitvale, a block of 44th Avenue is pitted with craters. On one end of the street, a trench extends across the entire width of the road. On the other end, cars slow to weave around two six-inch-deep bowls.

“It’s very iconic to me, when it comes to potholes,” said Itzel Diaz-Romo, who moved to Fruitvale 13 years ago from Mexico. “The whole time that I’ve lived in the US, they’ve never fixed this street.”

“We’re low-priority when it comes to fixing this stuff.”

Potholes may seem like an unlikely emblem of urban inequality but, in cities around the U.S., the condition of a neighborhood’s streets will often indicate its economic makeup.

Diaz-Romo works for local community group the Unity Council. She says in low-income neighborhoods like Fruitvale, bad roads are more than an inconvenience — they’re a symbol.

“It’s just a constant reminder of, ‘Oh, of course, this is a poor neighborhood. We’re low-priority when it comes to fixing this stuff,’” she said.

Tamika Butler, a transportation planner and director of equity and inclusion at consulting firm Toole Design, says traditional paving plans have left lower-income and minority areas with roads in the worst condition.

How we usually fix roads

Every city has its own formula for deciding which streets receive limited road repair funds. Typically, cities prioritize roads that are in the poorest condition and bear the heaviest amount of traffic.

Oakland’s transportation director, Ryan Russo, describes this as the “base, rational way” of fixing roads: take “the roads that are most deteriorated and fix them, and also factor in the importance of that road,” he said.

But potholes are also a classic local political issue. Elected officials often set aside some funding to address complaints. In its last paving budget, the Oakland City Council, for instance, reserved 20% of funds to direct based on complaints or council member input.

“They’ll also need to be responsive to people who are writing the letters and making the phone calls,” said Russo.

“We want to make sure we can get out and that our roads will suffice. “

When Oakland analyzed the condition of its streets, it found that its three lowest-income areas — where two-thirds of the population live — also happen to have the largest share of local streets in poor condition.

Specifically, while every area of the city will receive some of the new funding to fix side streets, the plan determines how much an area will receive using a formula that factors in the number of lower-income and minority residents.

“It’s one piece of the puzzle that can be used to fight historical injustice,” Russo said.

The Oakland plan distributes almost half the new money for local street paving to two lower-income areas, Fruitvale and East Oakland, despite their having only about a third of the roads needing repair. That has drawn backlash from some wealthier communities.

The affluent North Oakland Hills has 16% of the roads the city says need repairs, but will receive just 9% of funding.

“There’s been a fire in the Oakland Hills every 20 years, so we’re due now,” said Hillary Conlon, a board member on the North Hills Community Association. “We want to make sure we can get out and that our roads will suffice.”

On a drive along neighborhood streets designated as emergency exits in the event of a fire, Conlon points out overgrown brush, potholes and depressed sections of asphalt.

“There have literally been people working 20 years at this [upgrading the roads], and they haven’t necessarily gotten very much headway,” Conlon said.

She says she supports directing funding toward underserved communities, but not at the expense of the safety of her neighborhood.

On another drive, Michael Tigges, a homeowner in the wealthy Montclair neighborhood of Oakland, expresses similar concerns about safety, but adds a financial complaint about the funding plan.

“True equity means that folks who historically have had the least get the most.”

How should cities balance competing concerns? Oakland’s old formula distributed the bulk of its funds based on relatively objective criteria, but it still led to low-income neighborhoods with a disproportionate share of the city’s bad roads. Advocates for including race and income in the equation argue that political decisions helped shape those neighborhoods in the first place.

“We know there are certain communities that have historically been discriminated against, have been left out of resources,” said Butler. “And so true equity means that folks who historically have had the least get the most.”

Butler mentions many communities also suffered historically from redlining, where, for instance, banks refused to lend to residents and businesses in minority communities. And, she says, reckoning with the damage from a pothole — where the average repair costs more than $300, according to AAA — can have a greater impact on the finances of a low-income household.

“Other people might say, ‘I got a flat, no big deal,’” said Butler. “[But for a household on a tight budget] that is a huge deal. That might mean the difference between feeding your kids dinner.”

Back on 44th Avenue in Fruitvale, Itzel Diaz-Romo hopes that smoother roads will also lead to more community engagement.

“If streets like this get fixed, people in the neighborhood will say, ‘Oh we’re not forgotten,’” she said. “’We’re not ignored.’”