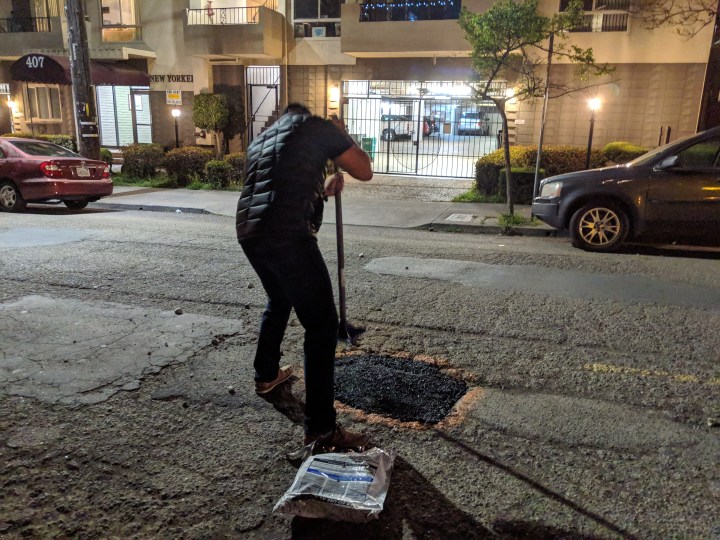 Never underestimate the enterprising spirit of humans annoyed by potholes. While Congress and President Donald Trump discuss a possible trillion-dollar infrastructure package to address a backlog of deteriorated roads and bridges, in cities around the United States (and other parts of the world), pothole rage has prompted civilians to take matters, and shovels, into their hands.

In Oakland, California, the Pothole Vigilantes have begun accepting donations on their Instagram account to fill potholes. The two men, Eric and Brian — who withheld their last names — say they use the same quick-dry asphalt as the city.

“We just pretty much learned how to do it in five seconds after we Googled it and saw a short, two-minute clip,” Brian said.

On one recent evening, the vigilantes filled three craters on the street where Jesse Hawkins lives.

“We need more guys like this,” Hawkins said. “I have to, like, zig-zag, and I’ve had my rims smashed, like, a few times, and the city never does anything.”

Although their Facebook page has not been active recently, for a time in 2017, the group Portland Anarchist Road Care was patching potholes and rallying residents of Portland, Oregon, to join them.

Domino’s Pizza announced a campaign in June 2018, where customers would nominate roads in need of fixing, and the pizza company would send out crews to pave some of them. The company said it will repave one community in each state.

In Michigan, this video of a 12-year-old filling in potholes last month went viral, with almost 150,000 views at the time of this writing. The boy, Monte Scott, used dirt from his own backyard to fill the craters on his street. A local TV news station interviewed his mother.

“We really don’t want people to have to do that,” said Ryan Russo, the director of Oakland’s transportation department. “For one, we have protocols to keep our workers safe, providing high-visibility clothing and officially sanctioned traffic-control plans that will keep people doing the work safe.”

Not all pothole protests involve fresh asphalt. In cities around the world, people have found their own ways to draw official attention to the pits bedeviling them.

The “Game of Throne’s” villain, the Night King, crawls out from one pothole in Oakland.

In Panama City, Panama, the advertising firm Ogilvy created “tweeting potholes” in 2015 for a news station. The company put small devices inside potholes that would automatically tweet at the Department of Public Works, complaining about the pothole.

In North Oakland, Ashley Lindquist lived in a neighborhood where she says a deep pothole filled the intersection.

“When I was giving directions to my house, I’d just say, ‘Watch out,’” Lindquist said. “It had been there forever, and it was just getting increasingly deep and dangerous, and then someone just took matters into their own hands.”

Lindquist recalls a crude drawing in orange spray paint depicting a certain portion of the male anatomy. Within the week, she says, the city had paved over the pothole.

This technique has been used in other communities, with a street artist in Manchester, England, going by the moniker Wanksy, especially drawing attention. (You can see the artist’s Instagram here, but be aware it is very not safe for work.)

In Oakland, Russo also denies that the tactic works.

“The people who feel potholes and the people who work on graffiti abatement are different crews with different equipment, so it’s really not a thing,” Russo said. “But obviously if it’s noticed, we might fill it. But that’s a hypothetical that I haven’t heard of. That’s a new one.”

Marketplace in no way endorses citizens taking up shovels or spray paint to address their pothole woes themselves, but it seems as long as the scourge of potholes remains unchecked, individuals will rise up against them. 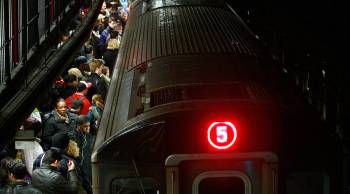 Infrastructure: What needs fixing in your neighborhood?