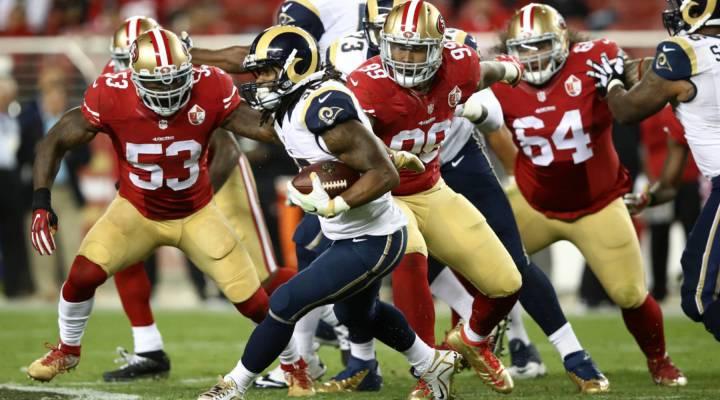 COPY
Todd Gurley #30 of the Los Angeles Rams rushes against the San Francisco 49ers during their NFL game at Levi's Stadium on Monday in Santa Clara, California. Ezra Shaw/Getty Images

This Thursday night, NFL fans will have a new way to watch the game — streaming it on Twitter. It’s part of a $10 million deal the social media company won back in April.

The streaming deal is an experiment for both the NFL and Twitter to test new ways to reach out to their respective — and sometimes overlapping — audiences.

“The NFL probably could’ve gotten more money than it got from Twitter, and that may be correct, but the idea is this is an experiment,” said Adam Grossman, CEO and founder of Block Six Analytics.

Grossman pointed to the NFL Network as an example of the league’s track record of testing different ways to reach audiences.

“The NFL’s really good at experimenting with new technologies and new platforms to see what works and what doesn’t work, and then maximizing revenue or maximizing engagement and being able to best target fans as they learn more about the behavior of fans across different platforms,” Grossman said.

He said the decision by the NFL to go with Twitter was influenced by the popularity of streaming video and the realization that social media companies already have a large potential audience.

“People are not necessarily going to core website,” Grossman said. “They’re not as much going to the NFL.com. They’re going to Facebook, Twitter, Instagram, Snapchat. So, potentially, streaming games where audiences or larger audiences are is something that makes a lot of sense for the NFL.”

For Twitter, which is paying the $10 million for broadcast rights, ad sales are expected to outweigh the costs. Even more important, however, is the opportunity to regain relevance among users.

“Live events and live sports, specifically, are one of the last bastions of linear TV,” said Craig McAnsh, chief marketing officer for experience marketing company Infrared. “It’s one of the few reasons that people actually have to watch something at a certain time.”

If viewership is satisfactory, Twitter would be well positioned to stream other live events.

“By experimenting with the NFL, they get to find out whether or not live sports will or will not be a pathway to their future success,” McAnsh said.