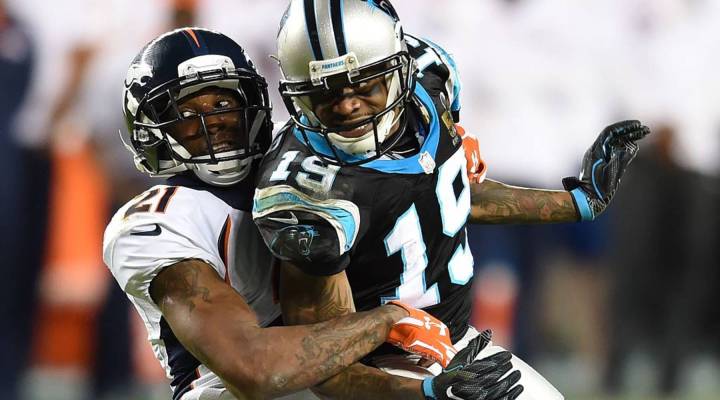 COPY
Aqib Talib of the Denver Broncos vies for position with Ted Ginn, Jr. of the Carolina Panthers during Super Bowl 50 at Levi's Stadium in Santa Clara, California February 7, 2016.   TIMOTHY A. CLARY/AFP/Getty Images

This spring the NFL signed a deal with Twitter to let it live-stream 10 Thursday Night Football games when the season kicks off this fall. Twitter paid $10 million for the privilege, and recently it’s begun to sell ads that football fans will see alongside that live steam as they tweet during the game.

The partnership with the NFL could be coming at just the right time. David Campanelli is executive vice president of video investment at Horizon Media.

“Twitter is absolutely in a phase where they need to really define who they are and what they’re about,” he said. “And their strengths very much lie in supplementing live events, sports being a huge part of that.”

Simon Ogus, co-founder of the site SportTechie.com, agrees. He said the deal is a boon for advertisers because it’s so easy to get data on Twitter users: where they live, what their interests are.

“So Twitter is going to be able to sell a lot of local ad spots,” he said. “They can target a lot of specific people that are watching in San Francisco,” or any other city.

Jessica Liu is a senior analyst for Forrester Research. She said Twitter has tried to imitate other social platforms like Facebook. But what makes the social network so distinctive is its real-time quality.

“You’re able to catch live updates as fast as they are happening,” she said. “In fact some people turn to Twitter before they’ll turn to Google search to get news about some breaking news story.”

And it’s that that makes it the perfect live event partner. She said Twitter and advertisers will do this more often, and not just at football games. Think about the explosion of tweets and opportunity around the Olympics – or even the Oscars.