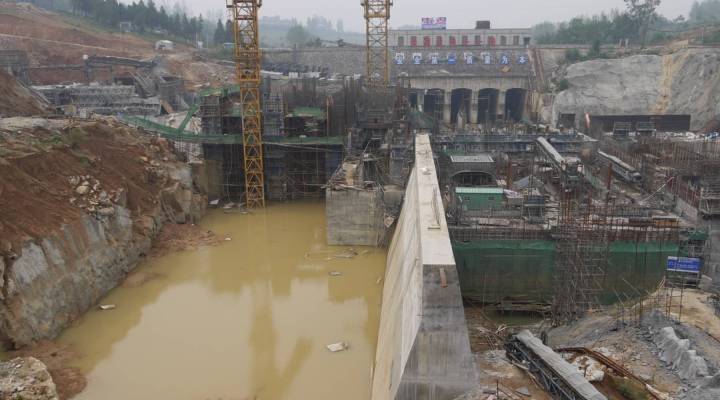 Yang Shufang wakes up at 5 o’clock each morning and fetches water.

“I bring a few buckets, enough for drinking or cooking,” she says.

Yang doesn’t live in the remote countryside, and her water isn’t from a village well. She lives on the seventh floor of a luxury condominium complex in Lintao, a Chinese city with nearly 200,000 people that’s run out of water.

“Right after Chinese New Year, water stopped coming out of the tap,” Yang says. “Now we have to stand in line each morning at the front gate of our complex with our buckets and wait for water to be delivered.”

Lintao is in Gansu province, in China’s arid northwest, situated along the Tao River, a tributary of the Yellow River. The combination of a drought and a surge of urban development means the city’s underground water supply has dwindled to dangerously low levels, leaving tens of thousands of people without easy access to the precious resource.

Experts fear Lintao could be a sign of things to come.

“Four hundred Chinese cities now face a water shortage. One hundred and ten cities face a severe water shortage. This is a very serious problem,” says Liu Changming, a retired hydrologist for the Chinese Academy of Sciences in Beijing.

China is home to more than 20 percent of the world’s population, but it contains only 7 percent of the world’s fresh water. Liu, who advises China’s leaders on water policy, says all of China’s so-called “water scarce” cities are in northern China, home to half a billion people, and a region that contributes nearly half of China’s economic growth. Former Chinese premier Wen Jiabao once called northern China’s water shortage “a threat to the survival of the Chinese nation.”

Each morning for the past two months, Lintao resident Li Zhenguo wakes up early and carries containers to the gate of his condominium complex to collect water from the government. Much of this city of nearly 200,000 people ran out of groundwater in February. Experts consider Lintao a warning sign for the rest of northern China, where 500 million people live in what’s known as “water scarce” regions.

It wasn’t always this way.

“When I first arrived to Beijing 60 years ago, there were springs everywhere,” remembers retired hydrologist Liu, “Some bubbled up half a meter high. There were rice paddies. But now the population’s increased sevenfold, and there are seven ring roads around the city. That abundant supply of water is gone.”

According to Wang Shucheng, China’s former minister of water resources, at current rates of water extraction, many cities in northern China — including Beijing, home to more than 20 million people — will run out of water in 15 years.

Wang said this 11 years ago.

That’s why China has spent more than $60 billion constructing the world’s largest water transfer project. In all, 2,700 miles of man-made waterways and canals will draw water from China’s southern rivers to satiate northern China’s thirst, the equivalent of building a cement river to take water from New York City and delivering it all the way to Los Angeles. Two of the three segments of China’s South-to-North Water Diversion Project are completed. Beijing began receiving water in December of 2014 from the project’s middle segment, a man-made river that draws water from the Han River, an important tributary of the Yangtze flowing through central China. The nation’s capital celebrated the arrival of hundreds of billions of gallons of water with reassuring state media reports that the water crisis had been averted.

But Liu says Beijing based the amount of water diverted for the project based on calculations of the Han River’s flow from the 1950s to the 1990s.

“These days, the water flow isn’t the same,” says Liu. “From 2001 to 2010, the water in the Han River decreased by more than 7 billion cubic meters. Such a huge drop in the amount of water might be problematic when we try to accomplish our original goal.”

Liu wrote a letter to former Premier Wen Jiabao about the problem, and he says leaders are now working out a solution, though he neglected to give any details. An obvious solution, say experts, would be to draw even more water from the Han River, a waterway 30 million people depend on.

“But what about them? Northern China needs water, but Southern China suddenly doesn’t need it?” asks Dai Qing, a journalist and author of “Yangtze! Yangtze!” an investigation into the damming of China’s longest river. “How can you take something others also need just because you’re the capital? This is not just.”

Dai says the state of her country’s water — its scarcity and its toxicity — is the greatest danger facing China today.

“Every year the groundwater in Northern China drops by a meter. One meter per year! That’s frightening. But diverting water from the south is not the answer,” says Dai. “It will alter nature, and it absolutely should not be done. We are not smarter than nature, nor are we more powerful.”

The city of Lintao continues to build apartment complexes to accommodate more city residents despite the fact that the city has run out of groundwater. Local officials tell Marketplace they have no choice: They must pull rural residents out of poverty to meet the central government’s urbanization goals. The city is constructing a pipeline that will draw city water from the surface of the nearby Tao River.

Hundreds of miles south of Beijing, along the Han River in Hubei province, farmers return from the fields after a day’s work. Since the South-to-North Water Diversion project began drawing water from this region, the water level in the river has dropped, say farmers Li Kaiding and Wu Tianzhong.

“It’s dropped so much that big ships can no longer navigate the river,” says Li. “Nobody told us the water level was going to drop! The upper level of the government notifies the lower level, but we’re farmers, and nobody tells us anything!”

When asked what they think of the project, another farmer launches into a tirade.

“What does it matter what we think?” the man screams. “We have no say, anyway! No matter how good the policies from Xi Jinping are, the local government always messes it up! The central government should come on unannounced inspection tours like they did in the old days to investigate these crooks!”

In Lintao, the northern Chinese city that has run out of water, local officials have found a familiar solution. With the city’s groundwater tapped out, the city is hurriedly constructing its own water diversion project: a pipeline that will draw hundreds of millions of gallons of water from the surface of the Tao River to meet the needs of the city’s 200,000 residents. When questioned about the impact the pipeline will have on the already parched Tao River, Lintao County water manager Lei Yongping shakes his head.

“It won’t have any impact whatsoever,” he says calmly. “This has been certified by experts. If the experts didn’t determine this, we wouldn’t be building this pipeline.”

But where these experts were when his city ran out of water? A county propaganda official at Lei’s side interrupts the question, blaming Lintao’s water crisis on a sudden influx of new residents to the city.

“Our county is designated a national poverty alleviation region, and the central government requires us to move these people to the city to lift them out of poverty and raise the urbanization rate,” explains county propaganda official Bian Dongsheng. “We can’t allow these people to drag down the central government’s goal of building a moderately prosperous society by 2020.”

Bian’s slogan-filled answer is fit for a propaganda poster. “Moderately prosperous society” is the official lingo for President Xi Jinping’s goal to urbanize China. And the pressure from China’s leadership on rural communities like this to urbanize, explains Bian, means Lintao has run out of groundwater.

“Our economy must develop very, very fast,” explains Bian. “This is a central government policy. Only this way can we bring our people out of poverty. Our government is trying our best to restore water to Lintao, but the momentum of economic development will not be stopped. No force can stop it.”

Not even, insists Bian, the force of nature, as more and more humans compete for a dwindling supply of water.