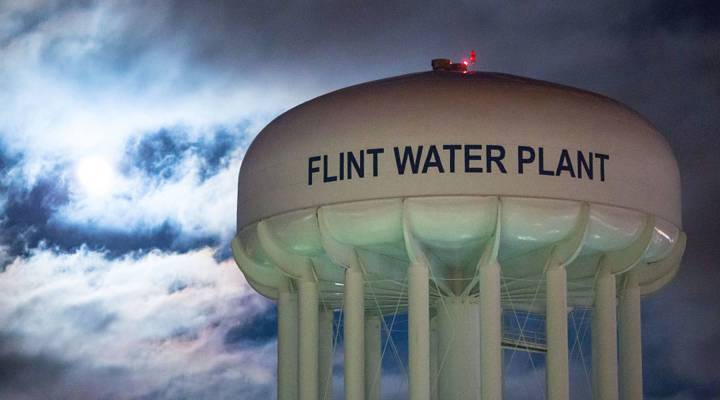 COPY
The City of Flint Water Plant is illuminated by moonlight on January 23, 2016 in Flint, Michigan Brett Carlsen/Getty Images

The City of Flint Water Plant is illuminated by moonlight on January 23, 2016 in Flint, Michigan Brett Carlsen/Getty Images
Listen Now

To fix the water crisis in Flint, Michigan, city and state leaders may need to replace all the lead pipes in its water system. The big problem? The city doesn’t know where those pipes are.

Lead began seeping into Flint’s water supply in 2014, when the city started using the Flint River as a water source to save money. At the time, Flint’s finances were under control of a state-appointed emergency manager. Previously, Flint bought water from Detroit’s system. The Flint River water was corrosive, and not treated with “corrosion control,” chemicals that would have prevented lead leaching from the pipes into the city’s water.

Homeowners across the city aren’t sure if their homes are serviced by lead lines. “We don’t know,” said Kenneth Madison. “Hasn’t anybody said anything about it?”

“I don’t think anybody knows,” said resident Roger Mosby. He added that “somebody downtown,” in city government might have an idea.

The city keeps its water records on index cards in a gray filing cabinet in its water service center. The cards have handwritten notations — some as old as the 1920s — with a house’s plot number, and a description of its service lines. One for each house.

“There are 50,000 cards in this catalogue,” said Alan Roberts, who works there. “But nobody knows the exact number.”

Some of the 50,000 or so index cards used to keep Flint’s water records.

Roberts has been slowly building a database of Flint’s service lines by looking at the cards, and scanning a series of yellowed and peeling maps.

Roberts was doing this on his own long before Flint’s water crisis became a national concern. Now, a team from the University of Michigan at Flint is putting this data into their computerized mapping systems. They hope to finish compiling their information in about ten days. Then, the researchers will share it with the city and state.

So far, about 10 percent of the homes the University of Michigan team has mapped have lead service lines. But, because Flint’s records are so spotty, the final percentage could be higher.

Flint is not an outlier. Many old American cities likely don’t know where their lead lines are, according to Lyke Thompson, a professor at Wayne State University. Unlike Flint, however, other cities put anti-corrosion chemicals into their water to make sure lead pipe lines don’t leach.

“Since the corrosion control works,” said Thompson, “They don’t have to know exactly where those lines are.”

Flint doesn’t have that option. Replacing the lines could cost hundreds of millions of dollars. But they have to find them first.