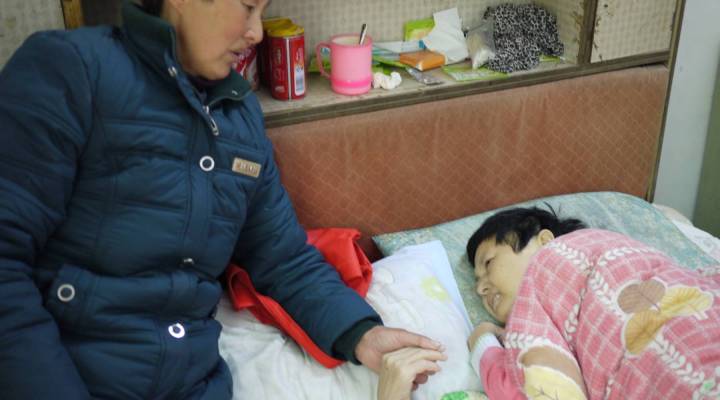 COPY
Liuchong villager Zhang Runxiang, with her mother in 2013, died two days after this picture was taken. Villagers say their water has been poisoned by a chemical company. Rob Schmitz/Marketplace

Liuchong villager Zhang Runxiang, with her mother in 2013, died two days after this picture was taken. Villagers say their water has been poisoned by a chemical company. Rob Schmitz/Marketplace
Listen Now

Three years ago, I sat beside the bed of Zhang Runxiang as the 42-year-old lay dying of uterine cancer. She and dozens of others in Liuchong village, a tiny hamlet in central China’s Hubei province, have petitioned China’s government and complained on state-run television that they’ve had been poisoned by Dasheng chemical, a company that manufactures phosphate fertilizer on a hill above the village.

Two days after I visited Zhang, she died.

She is buried on a hillside above the village. Spring rain from low, dark clouds overhead soak the terraced plots of bright yellow rapeseed surrounding her grave.

Xu stands with an umbrella, bowing to her friend’s tomb. The two belonged to the same village farming collective. Xu walks across the hillside to the next hill — nothing grows on top of this one.

Hills of radioactive phosphogypsum surround the village of Liuchong.

Phosphogypsum is the byproduct of making fertilizer. It’s radioactive, and according to the U.S. Environmental Protection Agency, it contains cancer-causing chemicals like arsenic, uranium and radium. The agency has prohibited its use in the United States. A 200-foot-high hill of phosphogypsum ash looms over Liuchong village, a stark whitish-gray peak that grows taller each day, as Dasheng Chemical’s trucks unload more ash on top of it. When the wind blows, the radioactive ash falls like fine snow over the village, and when it rains, its toxic chemicals seep into the ground. Tests of the water in this village, funded by the European Union, show arsenic levels nearly 200 times what China considers safe — levels of fluoride are 900 times higher than the national standard.

“All this pollution is illegal, but what can we do? We’re just ordinary people, and we’re stuck here,” said a doctor assigned to treat patients here. The village is hopeless, the doctor said. “Our only hope is that journalists get the word out. Living here is a death sentence.”

Three years ago, state-run CCTV, China’s most popular television news organization, broadcast a half-hour documentary about the health problems of villagers here. The report said 20 villagers had died of cancer likely caused by Dasheng’s pollution. The village doctor said out of 300 villagers who live near Dasheng Chemical’s factory, 30 have died from cancer and five more will likely die soon.

“Patients come to see me every day because they feel weak and dizzy. I estimate 80 to 90 percent of the people in this village are suffering from low white blood cell counts or anemia.”

The doctor agreed to speak for this report under condition of anonymity because Dasheng Chemical’s owner, a man named Zhong Shoubin, has threatened villagers about talking to outsiders about his company’s pollution, the doctor said.

“He has told us that if we say anything bad about his company, he’ll have us killed,” the doctor said.

CCTV’s 2013 documentary featured a villager who said Dasheng’s owner threatened to have her run over by a truck. Others Marketplace interviewed said they, too, have witnessed these threats, but it hasn’t stopped villagers — some dying of cancer anyway — from traveling to Beijing to petition China’s central government to clean up the pollution. That hasn’t worked either.

“They sent us to a local police station, detained us, and then our local government officials picked us up and promised to compensate us, but nobody’s ever cleaned up this mess,” said villager Tian Fuxue.

Li said he was fired because he allowed too many of his villagers to petition in Beijing. Marketplace spoke to him in 2013, while he took care of his father, who was dying of cancer.

“As the former leader of this village, I feel ashamed,” said Li. “Our villagers are telling the truth, and I’ve appealed to my superiors many times, but nothing has ever been done to stop the pollution.”

Interview requests to both the Hubei provincial government and China’s ministry of environmental protection went unanswered.

“Water pollution is a severe problem in China, especially in rural areas,” said Jiang Wenlai, a researcher at the Chinese Academy of Agricultural Sciences in Beijing. “If this cannot be solved, it will do enormous damage to China’s economy. But the government is now starting to pay a lot of attention to the environmental problems in rural China.”

Jiang and other scientists in Beijing are encouraged by Chen Jining, China’s new minister of environmental protection. Since the former water expert took his position more than a year ago, he’s encouraged citizens to document water pollution via social media and report it to authorities — he’s also vowed to get tough on polluters.

But so far, these new efforts have been aimed at the wealthy class in urban China, and polluted Liuchong village is far from Beijing. After years of protesting in front of county government offices, the local government finally agreed to begin piping cleaner drinking water to villagers. The new water comes from the nearby Han River, a waterway that,
according to China’s top hydrologists, has been increasingly prone to pollution since part of it was diverted to Beijing in 2014 to solve that city’s water shortage. Xu Huiping said the county government asked each villager to pay the equivalent of $300 — more than a month’s salary for most of them — to pay for the new water.

“The government should pay for it, and the factory should pay even more for it. We shouldn’t have to pay! They polluted our water!” she exclaimed.

Better drinking water came too late for Zhang Runxiang, whose rain-soaked grave overlooks the village where she used to live, and beyond that, hills of radioactive ash. Her friend Xu Huiping points to her friend’s tomb.

“Her name isn’t on the tombstone yet. It’s our custom to wait three years. The anniversary will be here soon and her name will be etched into the stone.”

And when it is, the death of the latest villager in Liuchong to succumb to cancer will be official.

The tomb of Zhang Running stands on a hillside overlooking fields of rapeseed, and beyond that, Dasheng Chemical’s factory complex. Zhang died of cancer in 2013.

Correction: A previous version of this post misstated when Chen Jining took up his new job. The text has been corrected.