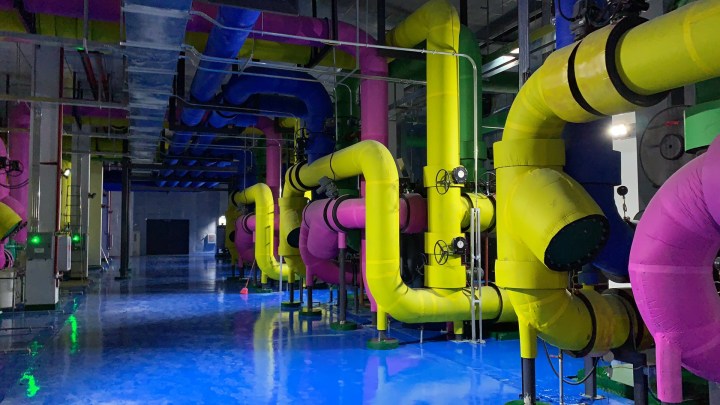 COPY
U.S. products used in a water-treatment system at a Chinese factory. The equipment is among the goods carrying extra Chinese tariffs. (Courtesy of Su Nengwu)

U.S. products used in a water-treatment system at a Chinese factory. The equipment is among the goods carrying extra Chinese tariffs. (Courtesy of Su Nengwu)
Listen Now

The 37-year-old entrepreneur is a distributor for U.S. brand ScaleBlaster’s water-descaling system. Because of the U.S.-China trade war, he has to pay an additional 5% in tariffs to import goods into the Chinese market.

Su absorbs the extra 5% on top of the usual 13% in duties because he said most of his Chinese clients still want American products.

“At a government cloud computing project in [east China’s] Jiangxi province, a client told me that tensions between the U.S. and China are between national governments and don’t affect our business,” Su said.

However, that gap between geopolitics and business is shrinking, according to Kent Kedl, who is with the consultancy group Control Risks in Shanghai.

Over the past two years, the Trump administration has blocked Chinese tech firms and the countries closed each other’s consulates. Plus, there have been multiple rounds of tariffs imposed on hundreds of billions of dollars’ worth of goods traded between the two countries.

“Companies are going to be very hard-pressed to find any other market around the world that has the potential to grow as much in the next 20 years that China has.”

Even so, Kedl said each piece of headline-grabbing news, like closing each other’s consulates, shouldn’t send American businesses into a panic.

“The question is, so what? So they closed the consulate down. How is that going to roll out and hit your business?” Kedl said.

Kedl, who also advises Chinese firms on how to get approval from the powerful Committee on Foreign Investment in the United States, said those trying to enter the American market right now are at a disadvantage because of the anti-China mood.

“Getting tough on China is the only bipartisan issue we have in Washington, D.C., right now,” he said.

At the same time, American firms have complained of nontariff retaliatory measures by the Chinese government amid the trade tensions. Surveys done by the American Chamber of Commerce in China, headquartered in Beijing, and its sister body in Shanghai found that half of respondents experienced increased government inspections, slower customs clearance and other complications arising from bureaucratic oversight or regulatory scrutiny.

However, Kedl said he does not think the Chinese government is picking on all U.S. firms or American nationals.

“We can’t make that blanket statement,” he said.

He added that sometimes U.S. firms face increased scrutiny or inspections because the Chinese government has a goal to strengthen its regulatory system and enforce environmental protection measures.

China is not closed to foreign investment

Kedl said U.S. firms should pay more attention to which Chinese city they are operating in and what the local government prioritizes.

“You have to be looking in your industry, in your sector, among other companies here, among your suppliers. What is happening to them? How is the regulatory environment being enforced on them?” Kedl said.

He said China is still welcoming to foreign investment.

According to another survey by the American Chamber of Commerce, 61% of respondents doing business in China described their financial performance as “profitable” in 2019, which is down from 73% in 2017.

Kedl said it is a “fantastic time” to do business in China.

“Companies are going to be very hard-pressed to find any other market around the world that has the potential to grow as much in the next 20 years that China has,” Kedl said.

China’s economy rebounded quicker than expected in the second quarter, with growth of 3.2%, after largely controlling the spread of the COVID-19 virus. That brings the country’s GDP for the first half of the year to about U.S. $6.5 trillion, down 1.6% from the same period in 2019.

Some sectors are doing better than others. For example, pharmaceuticals, medical devices, biotech and health foods are flourishing because U.S. brands are seen as premium.

It seems water-treatment equipment should be included on that list too, according to Su.

He said his business has pretty much returned to normal from the pandemic.

Now, his biggest concern is how far the technological decoupling of the U.S. and China will go. It is not an easy scenario to plan for.

“U.S. companies are very advanced in innovation and technology,” Su said. “When I searched for alternative water-treatment equipment online, nearly 7 out of 10 suppliers were American.”