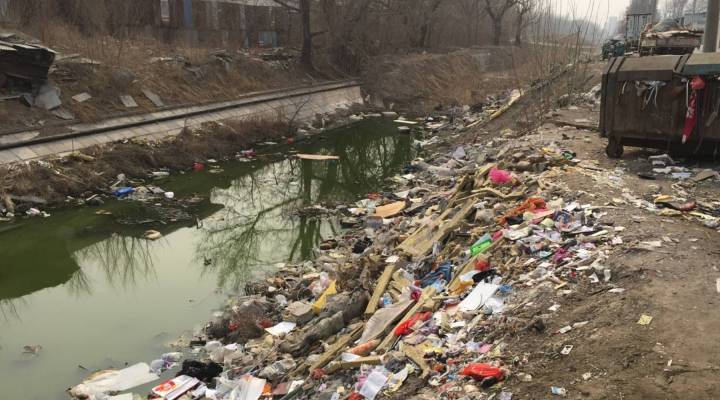 COPY
The Xiaolong River in a southern suburb of Beijing is filled with trash. Citizens throughout China are being asked to report such rivers to the authorities in a new government campaign aimed at cleaning up its polluted waterways. Rob Schmitz/Marketplace

The Xiaolong River in a southern suburb of Beijing is filled with trash. Citizens throughout China are being asked to report such rivers to the authorities in a new government campaign aimed at cleaning up its polluted waterways. Rob Schmitz/Marketplace
Listen Now

“Look at all this garbage!” Shi exclaims, descending a riverbank filled with trash and milky white water. “The water is very dirty, too. I’d say this river belongs in the black and stinky category.”

Shi is walking along the banks of the Xiaolong River. The waterway appears to have more garbage than water — diapers, cans of paint, Styrofoam packaging, discarded furniture. In some sections the water is jet black, then milky white. All of it stinks. Shi fishes his phone out of his pocket, taps the green icon of the social media app WeChat, and navigates to the “Black and Stinky Rivers” platform, a direct line to the government.

The numbers that reflect China’s water pollution problem are sobering: Nearly 80 percent of China’s 300 cities don’t bother to treat their sewage. Nearly half of China’s rivers are so polluted they’re unfit for human contact. This new government program is giving hope to residents like Shi, an environmental engineering graduate who wants a cleaner environment.

It’s also wildly popular. Nationwide, Chinese citizens in more than 200 cities have successfully added 2,000 rivers to the list. The Beijing Water Authority has promised to clean up all the rivers on the list by the end of 2017.

“This is one of the first times for the government to really, actually — not theoretically or abstractly — engage with people,” says Ma Jun, who directs the Institute of Public and Environmental Affairs in Beijing. “They want people to actually participate in the cleaning up.”

Ma says the black and stinky rivers program may have a funny name, but what it’s asking people to do — participate meaningfully in something that has traditionally been the government’s responsibility — is unprecedented.

He says China’s new minister of environmental protection, Chen Jining, is behind this new approach to engage citizens. Chen, a former water resources expert, is wildly popular among environmentalists for his take-charge approach to cleaning up China’s toxic air and water.

Chen’s predecessor, says Ma, shied away from public attention, but Chen’s first public appearance after he took his position three years ago was an engaging press conference with China’s media.

“And he’s continued to try to engage with the public,” Ma says. “And he has such an understanding of this issue, and he can talk about this with so much confidence.”

Ma and the Institute of Public and Environmental Affairs have created a social media app named Blue Map. With a swipe of a finger, it allows citizens to monitor hourly air and water emissions data from several thousand factories throughout China, all in real time.

This data has never been shared with the public. Up until now, says Ma, local officials with access to the data often interfered with enforcement because they were tied to the polluting factories.

“So our thinking is that if this data can be shared with the public, then the public who has gotten informed can support the local agencies and can overcome this interference,” he says.

Back on the smelly garbage-strewn banks of the Xiaolong River, Shi Dianshou is cautiously optimistic. “I’m sure the government will make it hard, but we’ll keep on them,” he says.

Correction: A previous version of this story misstated who developed Blue Map. It was created by the Institute of Public and Environmental Affairs.