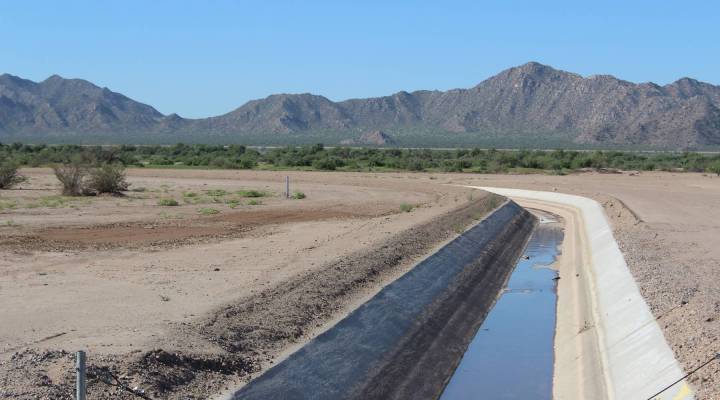 COPY
The Gila River Indian Community could have chosen to bank their water in underground storage systems through recharge facilities like this one on their reservation.  Carrie Jung/ for Marketplace

The Gila River Indian Community could have chosen to bank their water in underground storage systems through recharge facilities like this one on their reservation.  Carrie Jung/ for Marketplace
Listen Now

A lot of people and jobs in the Southwest rely on water from the Colorado River. According to a University of Arizona study, the river system contributes more than $840 billion to the Gross State Products of Arizona and California alone. But the region’s in a long-running drought. The threat of water shortages could put a lot of that economic activity at risk and that’s pushing local lawmakers to experiment with new ways of conserving water.

In Phoenix, for example, the big item on the City Council agenda this summer was water. After 17 years of drought, water levels in the region’s major reservoir have fallen close to shortage declaration lines and council members are considering a relatively new way of dealing with it.

In the past, Phoenix mainly entered into water agreements that dealt with storage to build up its savings. But this time council members are being asked to approve $2 million to compensate the nearby Gila River Indian Community. In return, the tribe will agree not to use a significant portion of its water supply this year.

“Hopefully the community can be a guiding star for all of these important entities within Arizona to look at the importance of drought conservation,” said Stephen Roe Lewis, the tribe’s governor.

The agreement passed Phoenix city council unanimously, meaning this year, the city, the state, the U.S. Bureau of Reclamation and the Walton Family Foundation will team up to pay the Gila River Indian Community a total of $7 million if the tribe leaves 13 billion gallons of its allotted water supply in one of the Colorado River’s major reservoirs, known as Lake Mead.

“Water is the foundation of public health, economic opportunity and quality of life in a desert city. We can’t afford to fail,” said Kathryn Sorensen, Phoenix’s water services director. She said this kind of agreement is pretty innovative because so many parties from federal and local governments, even the private sector are working together to find ways to voluntarily leave water in the system.

While $7 million may seem significant, past trends suggest the tribe could have secured more if it chose a different option, like banking water in a tribal underground aquifer system for credit from the state. The community also had the option of leasing its water supplies to nearby cities and towns. Still, tribal Governor Lewis said with no end in sight for this drought, both tribal and city officials agreed they had to try something new.

“We don’t squander water,” said Lewis. “Water is going to be as precious as oil and gold and even more so in the future and this was in line with our cultural teachings.”

Lewis added his tribe knows what it’s like to go without water. In the 1800s their farming economy was devastated when communities and industry upstream dried up the tribe’s natural access to water from the Gila River. Righting that wrong didn’t fully happen until 2004 thanks to a massive water settlement.

“This is something that no people, no population, whether indigenous, or non-native should go through,” Lewis said.

He explained the real goal of the deal with Phoenix is to lead by example so that others in the region might also consider more innovative solutions to weathering this drought.