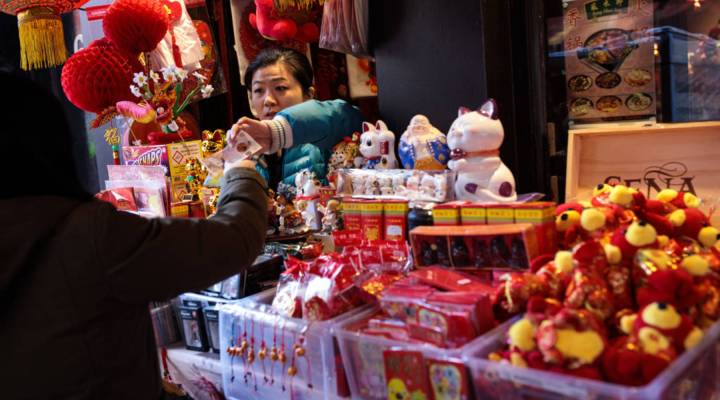 COPY
The Year of the Dog was celebrated by millions of Chinese people around the world on Feb. 16. Jack Taylor/Getty Images

The Year of the Dog was celebrated by millions of Chinese people around the world on Feb. 16. Jack Taylor/Getty Images
Listen Now

Chinese people are known as big savers, but the lunar new year, also known as the spring festival, is the one time of year when even farmers must splurge. Think of it as a combination of Thanksgiving and Christmas. The festival began on Friday and ends on Wednesday. Last year, Chinese people spent $122 billion during the weeklong holiday, and they’re expected to spend even more this year. What are Chinese people buying? Marketplace caught up with people at Shanghai’s Hongqiao Railway Station before they rushed back to their hometowns.

Distance from Shanghai: Four hours on a high-speed train

Gifts: Cash (lucky money) and 30 to 40 pounds of pig hearts (good in stews and stir fries)

“I’m bringing back three containers full of pig’s heart because it’s three times cheaper than in my hometown. I’ll pass some of it to friends and family.”

Distance from Shanghai: Five hours on a high-speed train

“In the past, I would bring back food specialties from this region, but this year we are taking two babies, so I haven’t brought anything with us,” Zuo Xiaofeng said.

His mother, Li Xiuzhi, says many things can be bought online and delivered to their village anyway.

“I may buy some clothes for my granddaughters, but they won’t be expensive. It’s not about spending lots of money. The most important thing for me is to see my parents and relatives and friends who I haven’t seen for a year,” Li said.

Distance from Shanghai: Two hours on a high-speed train

Amount he spends: at least one month’s salary or a few thousand yuan (a few hundred dollars)

A surprising hit with people from the countryside during the season: empty plastic buckets.

“I’ve brought three plastic buckets to use at home. I took them from my work site. They were going to throw them away. These buckets are handy in the village. You can fill them with water and store things,” said Huanzhu.

They can also double as a sturdy seat while waiting for the train.