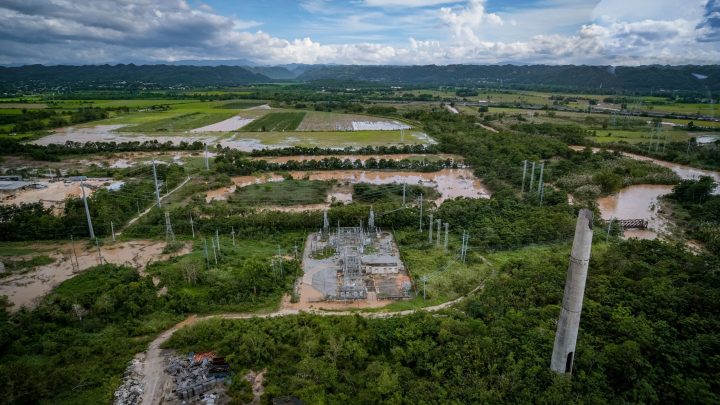 COPY
This aerial picture taken on September 20, 2022, shows a flooded area in Arecibo, Puerto Rico, after the the power went out with the passage of Hurricane Fiona. Photo by -/AFP via Getty Images

This aerial picture taken on September 20, 2022, shows a flooded area in Arecibo, Puerto Rico, after the the power went out with the passage of Hurricane Fiona. Photo by -/AFP via Getty Images
Listen Now

Much of Puerto Rico is still without essential services after Hurricane Fiona ripped through the island. The storm came just days before the five-year anniversary of Hurricane Maria, which exposed the fragility of the island’s infrastructure. This new storm has impacted residents’ access to clean water in the days after the hurricane moved on.

For the first 22 years of his life, Fernando Rosario-Ortiz lived in Puerto Rico.

“Growing up there, you know, we always knew that the water infrastructure could have been better,” he said.

He’s now a professor of environmental engineering at the University of Colorado in Boulder. After Hurricane Maria five years ago, he led a team back to Puerto Rico to study water quality issues that storm exacerbated. And, he said, problems start with the water system when you have power issues.

“Once you have loss of power, then obviously there’s loss of power for the pumps, for the distribution system, right. So then water is not available,” he said.

After Maria five years ago, many residents were without power for months. Officials hope to get electricity into homes a lot sooner this time around, but people are still without it.

“It’s increasingly hot on the island right now. So access to water is completely necessary. And yes, there’s a sense of, of resignation and frustration, especially after what were supposedly be lessons learned after Hurricane Maria,” said Fernando Rivera, director of the Puerto Rico Research Hub at the University of Central Florida.

The influx of billions in federal funding after Maria was supposed to make Puerto Rican infrastructure more resilient.

Bernard Yaros at Moody’s Analytics says five years ago, the island was in economic turmoil and those resources went a long way. It clearly didn’t solve all the infrastructure issues, but Yaros said that any new influx of money after this storm isn’t going to go as far. And it’s due to the overall economy.

The government has set up water trucks across the island where residents can stand in line to fill containers to use until their water is turned back on. Some residents are using water from streams if they’re far from a distribution center.