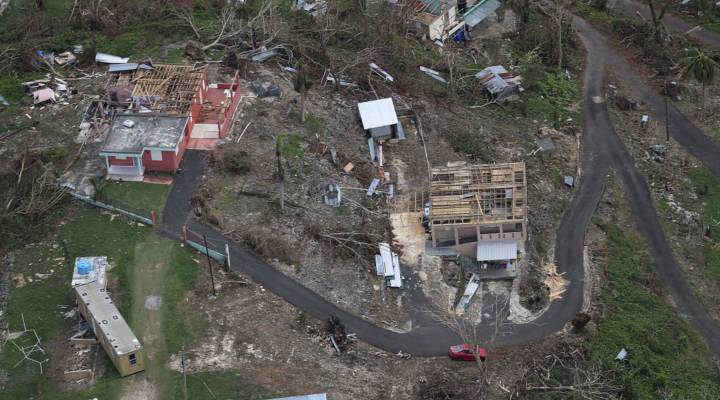 As the plane began its descent into San Juan, Luis Gonzalez looked out the window and quietly wiped away a few stray tears.

“My house is down there,” he said, gesturing at the skyline below. Gonzalez is Puerto Rican, from just outside San Juan. Though he’s lived in Brooklyn for over three decades now, his mother and much of his family still live on the island.

“It used to look green,” he said, surveying downed trees. “I don’t think it’s the same.”

Fifteen days after the Hurricane Maria made landfall, only 10 percent of the country has power and about half have running water.

Gonzalez, a cement truck driver, is one of about 300 union workers on the United Airlines flight from New York, headed to Puerto Rico to aid in its recovery. He’s frustrated that two weeks after the storm, aid seems to be arriving in Puerto Rico, but doesn’t seem to be getting out to the people.

“Why should I bring water from New York?” he asked. “I got food in my bag to bring to my mother. Why is she not getting food?”

The federal government has over 10,000 workers on the ground in Puerto Rico, doing everything from installing generators and temporary roofing on hospitals to delivering diesel.

But the need is vast, said José Rodríguez Báez president of the AFL-CIO in Puerto Rico.

“We need all of the help we can get here because all of the island was destroyed,” he said, as he greeted the plane full of union workers. “When you go to the community and you see the situation, it’s too difficult for our people.”

The mayor’s office in San Juan drafted a list for the AFL-CIO of different skills it needs and how many of each kind of worker it could use. Then the call went out to the union affiliates across the U.S. – for heavy equipment operators, drivers with heavy truck licenses, doctors and nurses, electricians and others. The mayor’s office will provide food and housing while the workers tackle jobs in San Juan and the surrounding areas.

Nurses and other volunteer union workers arrive in San Juan to aid in Puerto Rico’s recovery from Hurricane Maria.

The same United plane that brought the union workers to Puerto Rico, later loads about 250 evacuees to take off the island. The airline didn’t charge for seats on either leg of the journey and the crew staffing the flights were also volunteers.

Lilly Belez and her three-year-old daughter scored seats in first class. She choked up when the flight attendant brought out dinner – it was the first hot meal she’s had since the storm.

Over the last two weeks, finding milk for her daughter has been a daily struggle and she’s been eating bread, Chef Boyardee, sausages, cookies and cornflakes.

Alone with her daughter and desperate to get to family in Orlando, Florida, she only found out she could get on this United flight about six hours before it left. Two previous flights she booked to leave the island were canceled.

“This is very hard,” she said. “I didn’t have time to say goodbye to no one.”

She thinks she’ll be gone five, maybe six months, but she’s not really sure.

The Center for Puerto Rican Studies at Hunter College in New York estimates net outflows of residents leaving the island might double or triple this year, though those numbers could be tempered slightly by Puerto Ricans who return to work on the recovery.