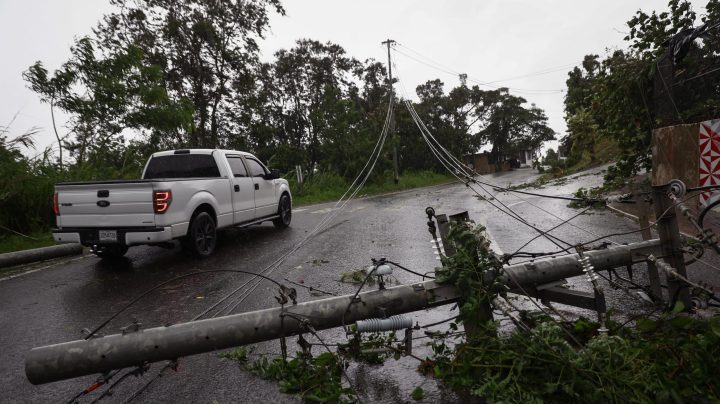 Architect Vanessa de Mari, who lives on the outskirts of San Juan, Puerto Rico, has been without power and running water since Sunday morning. It was her 16-year-old daughter who suggested they start collecting rainwater to flush the toilets.

“She said, ‘Mom, I have to go to the bathroom. We have not collected water,’” de Mari said.

Many on the island were still without power Monday. That’s as the U.S. territory was hit with heavy rain and flooding from Hurricane Fiona. The storm came almost five years to the day after Hurricane Maria wiped out Puerto Rico’s electrical grid, which left many people without power for more than a year. The Federal Emergency Management Agency put billions toward emergency repairs for the grid after it went down in 2017, but spending to make it more resilient has been slow to come.

In the meantime, those who can afford to make their own preparations have done so. Vanessa de Mari has a stash of emergency supplies: drinking water, canned sausages and a generator they use at night.

After Maria, “the sale of generators went through the roof. A lot of people decided to do it, at least the ones that could afford it. I mean, these things are not cheap,” said Sergio Marxuach with the Center for a New Economy, a think tank based in San Juan.

Marxuach pointed out that Puerto Rico is about the size of Rhode Island, but with complex geography, including a mountain range right in the middle.

He added that having one central grid with lines that go over the mountains makes it vulnerable to severe weather.

“You have to create a grid that can work in segments so the entire island doesn’t lose power when you get a storm from the south,” said Marxuach.

To make that happen would take about $14 billion and 10 years, according to Marxuach. Just a few weeks ago, FEMA pledged $9.5 billion to make the island’s power grid more resilient. And some say that grid should rely on renewable energy sources. There’s a proposal called Queremos Sol, which translates to We Want Sun.

“You would have people obviously generate power within their houses, businesses, accompanied with storage with batteries,” said Ingrid Vila, an advocate for the project with the Puerto Rican nonprofit Cambio, or Change.

Also, people are going to leave.

After Hurricane Maria, in 2018, more than 133,000 people left Puerto Rico for the mainland U.S., up more than a third from the year before.