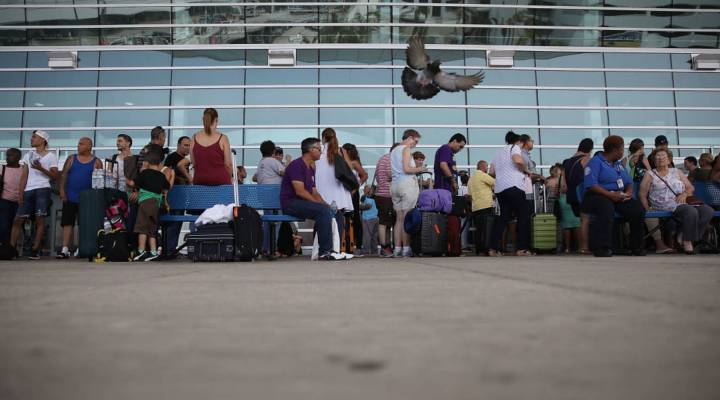 COPY
People wait in line to get a flight out of the Luis Munoz Marin International Airport as they try to return home or escape the conditions after Hurricane Maria on September 26, 2017 in San Juan, Puerto Rico. Joe Raedle/Getty Images
Weather Economy

People wait in line to get a flight out of the Luis Munoz Marin International Airport as they try to return home or escape the conditions after Hurricane Maria on September 26, 2017 in San Juan, Puerto Rico. Joe Raedle/Getty Images
Listen Now

Hurricane Maria, which has devastated Puerto Rico and left hundreds of thousands without electricity, comes at a difficult time for the island. Reeling from a recession, Puerto Rico has suffered a so-called brain drain, as its labor market shrinks and professionals flee to the mainland to find jobs. The island has lost more than 10 percent of its population to the mainland over the last decade, according to data from the Pew Research Center.

Now, after Hurricane Maria, a lot of ATMs on the island are offline or out of cash, and many businesses are closed. The hurricane has left Puerto Rico’s economy in shambles, said Edwin Melendez, director of the Center for Puerto Rican Studies at Hunter College.

“That means that unemployment is going to be significant after the storm,” Melendez said. “That itself is going to spike migration to the United States.”

Melendez estimates that up to 200,000 Puerto Ricans will move to the mainland over the next year.

Héctor Cordero-Guzmán, who teaches at Baruch College in New York, said the storm could worsen the island’s brain drain. Many of its young professionals — doctors, teachers, and engineers — have already been leaving. When they do, it’s a downward spiral for the economy, he said.

Hurricane Maria was the worst thing that could have happened to Puerto Rico at the worst possible time, he said.