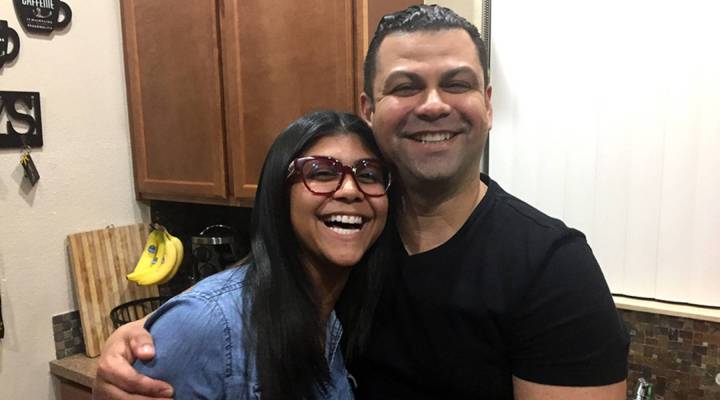 COPY
Nicole Morales and her father, Gary, get to spend more time with each other now that they're both on the mainland. Renata Sago/Marketplace

Nicole Morales and her father, Gary, get to spend more time with each other now that they're both on the mainland. Renata Sago/Marketplace
Listen Now

Before the sun has risen over central Florida, Nicole Morales is inside a factory building in Orlando with thousands of workers testing out internet routers. She carpools 40 minutes to the quiet industrial complex most weekday mornings with her uncle, a supervisor there. When Morales’ shift is over, she heads across town to the outlet mall, where she sells clothes to tourists.

It is hectic. It is hard. But the 21-year-old is grateful.

“When I got here, I was three weeks without a job, so I was going crazy because I was doing nothing at the house. I was just watching TV and applying for jobs, but I didn’t have anything,” she said.

Morales had been studying at the University of Puerto Rico and working two jobs when Hurricane Maria hit. She described her city Caguas as a “tree in the winter without leaves” after the hurricane blew through it. There was no food, no clean water and no place to sleep. She and her relatives lived off crackers and water.

Like millions of other Puerto Ricans, Morales waited for relief in the weeks after the storm. Then she found out her university wouldn’t open for another year.

The choice was hard. Morales, an only child, didn’t want to leave her mother, who has vowed to stay in Puerto Rico. But her uncle, grandmother and dad were already in Florida living together in Kissimmee. So many Puerto Ricans have moved to the growing central Florida town that it’s been affectionately nicknamed Bayamon, the second largest city on the island.

More than 190,000 people have left Puerto Rico for Florida since Hurricane Maria hit, adding to the number of Puerto Ricans who had steadily moved away as the island’s debt crisis continued.

Gary Morales, Nicole’s father, arrived in Kissimmee two years ago from Puerto Rico. He had stayed on the island as long as he could to be closer to Nicole, but a lack of economic stability drove him away. He said he doesn’t feel secure in his employment in Florida, but at least the overall economy and life around him is stable.

“In Puerto Rico, you can have a job, but, you know, the island is not doing great,” he said.

When Morales moved, he hoped his daughter would eventually come to the mainland, too.

“I’m very grateful that she’s here,” he said. “She’s going to have a lot of opportunities here in the United States. She wouldn’t have those same opportunities in Puerto Rico.”

Those opportunities aren’t automatic. Morales taught herself English growing up, which is why she has been able to find work faster than other evacuees who may only speak Spanish.

Maria and evacuees like her have been granted in-state tuition for Florida universities, but they have to apply first and meet academic credit and language requirements. She feels lucky to be one of about 300 Puerto Rican evacuees admitted to the University of Central Florida so far. There, she will continue her bachelor’s degree in January. She hopes to become an occupational therapist on the mainland. In the meantime, she will keep working and saving for a car.

“I was forced because of the hurricane to come here, but it was already a plan of mine to come here, so I’m very grateful. Maybe it’s a blessing too that that happened,” she said.