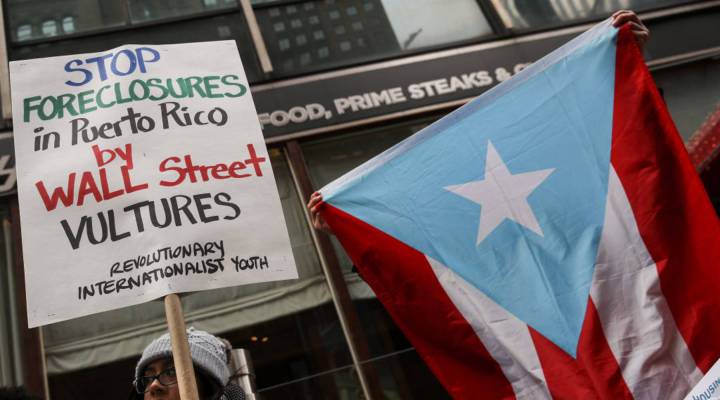 Protesters rally against foreclosures on Puerto Rican families affected by Hurricane Maria, outside the offices of TPG Capital, Dec. 20, 2017 in New York City. The activists claims that TPG Capital's mortgage service companies are aggressively foreclosing on families in Puerto Rico after many people were displaced from their homes following Hurricane Maria. Drew Angerer/Getty Images
Listen Now

With the news of thousands of people leaving their homes in Puerto Rico, I was wondering what really legally happens to their abandoned homes? Do they retain their ownership or is it forfeited?

By the end of November, more than 208,000 people made their way from the Hurricane-ravaged island of Puerto Rico to Florida. As many as 750,000 people are expected to leave Puerto Rico over the next four years. Many of them left — and will leave — their homes behind.

What will happen to the houses left behind depends on whether the house has been paid off or whether the owners are still making mortgage payments. If the house still has a mortgage and payments on that mortgage are not being made, then the home will be foreclosed on, according to Ricardo Ramos-González, coordinator of a consumer legal aid clinic at the University of Puerto Rico School of Law.

“Any abandoned property that has a mortgage will be subject to a judicial foreclosure process. Until then, the ownership will be retained by its lawful owners,” he said. “Then if they are finally foreclosed, it will become a real estate owned (REO) property of the particular bank. There is no special process to deal with that situation.”

Even before some of the moratoriums came to an end, there was widespread confusion about who qualified. Some homeowners assumed that moratoriums were extended to everyone. They were not.

More than 20,500 people who received moratoriums from Bank Popular — Puerto Rico’s largest bank — saw them expire in December and January. The bank is now ready to start collecting payments again, even if some parts of the island are still without power, thousands of people have lost their jobs and about 30 percent of small- and medium-sized businesses are still closed.

“Those clients that truly are not responding to the bank’s letters are those who really will be at risk of facing a foreclosure,” Jose Teruel, first vice president of the consumer credit services division at Banco Popular, told the Associated Press.

Threat of foreclosure is nothing new for many Puerto Ricans.

The Puerto Rico foreclosure crisis was years in the making

Even before Hurricane Maria made landfall, Puerto Rico was facing a foreclosure crisis. The island had a mortgage delinquency rate that was three times the national average. About 33,000 homes were foreclosed from 2009 to 2016. In 2016, a record high of 5,424 homes were foreclosed, according to NBC. On an island with 3.4 million people, an average of 14 families were losing their home every day to foreclosures.

“The foreclosure problem that Puerto Rico has experienced over the past few years is actually worse than what we saw during the height of the foreclosure crisis nationwide,” Daren Blomquist, senior vice president with Attom Data solutions, a U.S. housing data provider, told NBC in June.

Hurricane Maria was not the only storm to leave a wake of damaged and abandoned properties in its wake last year. By the end of 2017, there were 142,700 severely delinquent loans linked to last year’s storms — 102,500 in Florida and Georgia are attributed to Hurricane Irma while another 40,200 in Texas are said to be result of Hurricane Harvey, according to Black Knight, a financial data firm that collects and monitors monthly mortgage data. These delinquent loans represent 20 percent of all such delinquencies nationwide.

These numbers have been climbing every month since the storms hit. That should not be a surprise considering that according to Black Knight as many as 4.8 million mortgaged properties were in the path of Hurricanes Harvey, Irma and Maria. Their unpaid principal balance was nearly $746 billion, CNN reported in November.

Abandoned homes that are paid off

However, not all homes that have been left behind come with a mortgage. Some have already been paid off. In that case, its owners would still be required to pay local property taxes even if the home sits empty. What happens when owners do not pay their property taxes can differ from state to state.

The most relevant case study here would be what happened in Louisiana after Hurricane Katrina. It’s been over 12 years since the storm hit, yet many homes remain abandoned and damaged. These houses are often referred to as “blighted.” One of the reasons why the local government struggled to deal with these properties is because it actually cannot just seize them and sell them off.

“Before the city can sell a tax-delinquent property, state law requires the public and all owners to be notified and mandates waiting periods of up to three years. During that time, an owner could get back in the game by making a minimal tax payment,” according to a Reuters’ 2015 report on the 10 anniversary of the storm.

If the house is not tax-delinquent, the officials would have to track down the owner and try to purchase the house. Many of the blighted houses in New Orleans that had been paid off were passed down from generation to generation. Some of them are now owned by multiple heirs. The New Orleans Redevelopment Authority has been tracking down owners in an effort to purchase the homes from them and sell them at auctions or to neighbors interested in expanding their property.

It is too early to tell if a similar situation might occur in Puerto Rico.