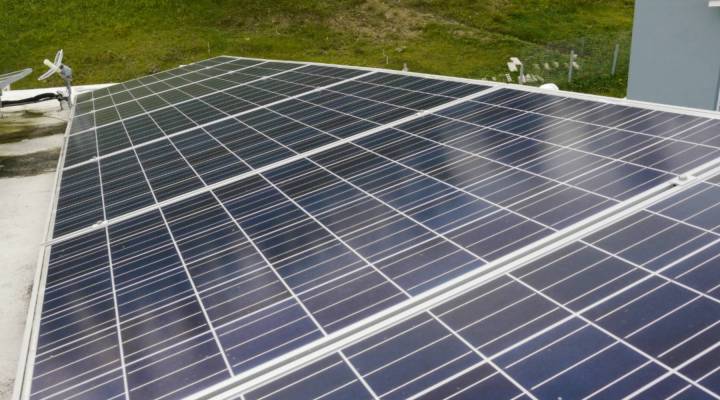 There aren’t many places you can go in Puerto Rico right now without being followed by a certain sound: the hum of diesel generators.

The mobile power units have been keeping the lights on since Hurricane Maria tore through the island almost three months ago. Residents and the government are spending hundreds or even thousands of dollars a week on fuel. And that, plus the slow restoration of the electrical grid, has people thinking about alternatives.

“Prior to Maria, people were turning to solar basically to save money, ” said Alejandro Uriarte. He’s president of the solar design and installation company New Energy, based in San Juan. “Electricity costs in Puerto Rico are expensive.”

One kilowatt per hour of solar-powered energy on the island costs around 6 cents. From the grid, it’s closer to 33 cents. Yet post-Maria, the demand for solar isn’t about money, but basic necessity, said Uriarte.

New Energy is one of Puerto Rico’s solar companies enjoying a bump in sales after Hurricane Maria.

“People just want something to power their homes, especially their fridge, couple of fans, light, computer,” he said.

But it’s not cheap, especially on an island that has been in a recession for a decade. For a 6-kilowatt residential package, explained Uriarte, customers will pay close to $15,000. Add storage, and the cost goes up by another $10,000.

Across town from New Energy’s headquarters, a home is being fitted with storage power. A grey box on the side of the house is bursting with red and green wires that will keep the lights on, if the grid fails. An install usually take three days, but “the materials here in Puerto Rico are very scare, they are not available like before,” which is slowing down the process, according to Jose Trinidad, who manages the onsite team.

A crew from New Energy install a solar storage unit to a house in San Juan.

Even with the delays, the orders keep coming in, he said. But when asked if PREPA, the Puerto Rico Electric Power Authority supports solar, Trinidad laughed.

“As soon as people get solar, their electricity bill goes down,  so if it impacts your economy or your market, you will try to put things in the way to slow things down,” he said.

Still, PREPA has a long way to go to fix the traditional grid, which is a business opportunity — albeit, a slightly uncomfortable one — for solar entrepreneurs like Uriarte.

“This change to solar was going to happen, but the hurricane just accelerated what was coming anyway,” he said.