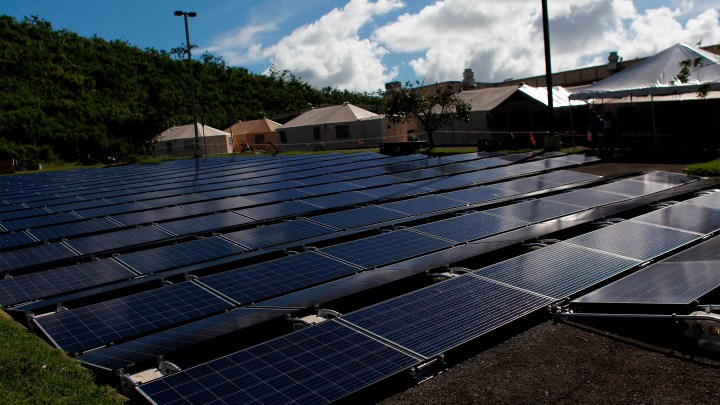 COPY
Solar panels at a hospital in Vieques in 2017. Puerto Rico's electric power system has been plagued by the damage inflicted by Hurricane Maria. Ricardo Arduengo/AFP via Getty Images

Solar panels at a hospital in Vieques in 2017. Puerto Rico's electric power system has been plagued by the damage inflicted by Hurricane Maria. Ricardo Arduengo/AFP via Getty Images
Listen Now

A full year after 2017’s Hurricane Maria, some municipal buildings in Mayagüez, a town on the west coast of Puerto Rico, were still without power.

That’s where Lionel Orama lives with his family. He said the storm led him to install photovoltaic (PV) solar panels on his roof.

Now the sun provides a third of his electricity.

“After Maria, people have started to develop their PV systems with batteries and separating that load from the grid,” he said.

Orama is in a unique position to upgrade his household’s power situation as he’s professor of electrical engineering at the University of Puerto Rico.

“What we need is a better system working better for the people of Puerto Rico,” he said.

As the commonwealth’s government copes with an economy in tatters as a result of the pandemic, it is moving to give up control of the power grid to a private utility.

“This public-private partnership brings some expertise to the island that probably was not otherwise there,” said Doug Holtz-Eakin, president of the American Action Forum. He said Puerto Rico’s nationalized system didn’t work and on top of that, it ran up $13 billion in debt to pensioners and bondholders. “They have the sort of overhang of debt from the past. Privatization is a chance simultaneously to sort of wipe that out.”

“You would think that this is an opportunity for market penetration by renewables,” Holtz-Eakin said.

Not everyone is optimistic about privatizing the energy sector in Puerto Rico. The electric workers’ union filed a lawsuit last week against privatization. The suit says the awarding of the contract hasn’t been transparent and smells of corruption.

“Instead of fighting over the benefits of privatization or nationalization, I would like to hear a discussion about what system do we want for the next hurricane season,” he said.