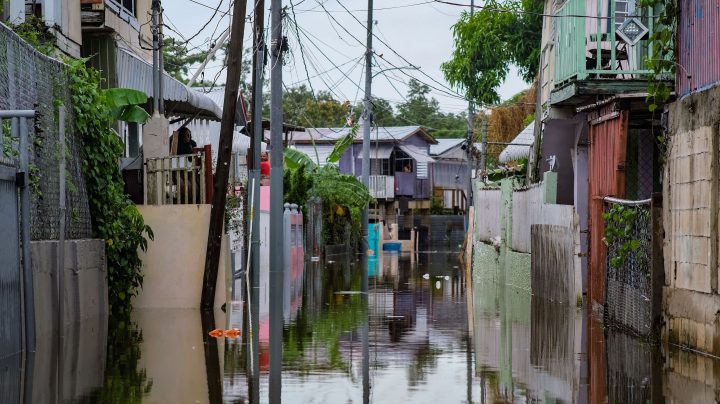 COPY
In the wake of Hurricane Fiona, an estimated 80% of Puerto Rico's population still lack electricity. Many people are stranded after more than 30 inches of rain fell in some areas. AFP via Getty Images

In the wake of Hurricane Fiona, an estimated 80% of Puerto Rico's population still lack electricity. Many people are stranded after more than 30 inches of rain fell in some areas. AFP via Getty Images
Listen Now

On Monday, we told you about the dire situation of Puerto Rico’s power grid due to the impact of Hurricane Fiona. A day later, things were not much better. An estimated 80% of the island’s population still didn’t have electricity. Many folks were stranded after more than 30 inches of rain fell in some areas. Rescue crews were helping people flee their flooded homes.

​Many people on the island have hurricane coverage as part of their homeowners policy, but the majority of them don’t carry supplemental flood insurance. That’s going to be a problem.

There’s a pattern to the storms that Isabel Oria has seen throughout her lifetime in Puerto Rico.

“We often see the greatest damage because of the forceful wind,” the San Juan resident said. “This one has been out of the ordinary. Most definitely.”

“This one” was more of a rain event.

Oria and her husband have hurricane insurance as part of their mortgage, but because they don’t live in a flood plain, they don’t pay for supplemental flood insurance.

“Most homeowners on the island do not have flood coverage,” said Mark Friedlander, with the Insurance Information Institute.

A study from the Wharton School found that fewer than 4% of households in Puerto Rico had flood insurance when Hurricane Maria struck in 2017.

And whether the wind or the water caused the damage to a policyholder’s home? That’s ultimately up to an insurance adjuster.

Ronald Schumann, who teaches emergency management and disaster science at the University of North Texas, said it’s time for that to change.

“There’s often this process that goes on to separate the wind from the water damage and determine what came first, what can be traced to which,” Schumann said. “But I think we need to be thinking about all-hazards insurance.”

Because the climate’s changing, and hurricanes will continue to drop lots of rain wherever they go.

And homeowners who never thought they’d need flood insurance, Schumann said, are going to find out they do.