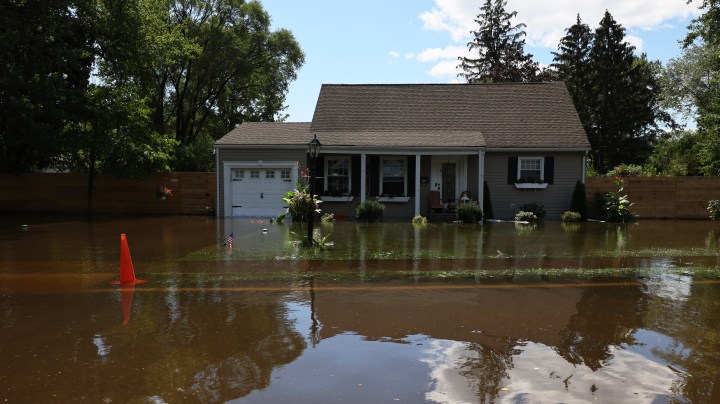 COPY
River water floods the front of a home in Lincoln Park, New Jersey, in the wake of Hurricane Ida. Covering flood damage proved to be a money loser for the insurance industry. Michael M. Santiago via Getty Images

River water floods the front of a home in Lincoln Park, New Jersey, in the wake of Hurricane Ida. Covering flood damage proved to be a money loser for the insurance industry. Michael M. Santiago via Getty Images
Listen Now

The remnants of Hurricane Nicholas are drenching Alabama, Mississippi and Louisiana — including areas that have barely started recovering from Hurricane Ida.

​There has been a lot of flooding over the past couple of weeks from the Gulf Coast to the Northeast, and many homeowners may be discovering that their insurance policies don’t cover flood damage.

“If you went back to the ’40s and ’50s and ’60s, there was a string of flood disasters that were quite costly,” said Rob Moore, who is on the water and climate team at the Natural Resources Defense Council. “Private insurers finally realized, like, ‘We are losing a ton of money by covering flood risk … and we’re simply just not going to cover it anymore.'”

In 1968, the federal government stepped in and created the National Flood Insurance Program.

Since then, according to Amy Bach at the consumer advocacy organization United Policyholders, private insurance companies have stopped covering other kinds of natural disasters too.

“After the 1994 earthquake in California, insurance companies decided they didn’t want to insure the peril of earthquake anymore,” she said.

After a number of storms in Texas, insurers stopped covering damage from hurricane-force winds. Now, that’s happening for wildfires.

“This issue of insurers having said in the ’60s, ‘OK, we’re out,’ and the federal government having said, ‘We’re in,’ is a pattern now that has repeated over and over,” Bach said.

Homeowners don’t always realize that their regular insurance doesn’t cover flooding, and most people who buy policies through the National Flood Insurance Program live in high-risk areas — which isn’t great for the program.

“The program’s $20 billion in debt,” said Carolyn Kousky of the Wharton Risk Center at the University of Pennsylvania. As climate change makes flooding more common, she said, something has to change.

“For example, there’s a group of properties that flood repeatedly, and the program keeps paying to rebuild them,” Kousky said.

That, she said, doesn’t make a whole lot of economic sense.