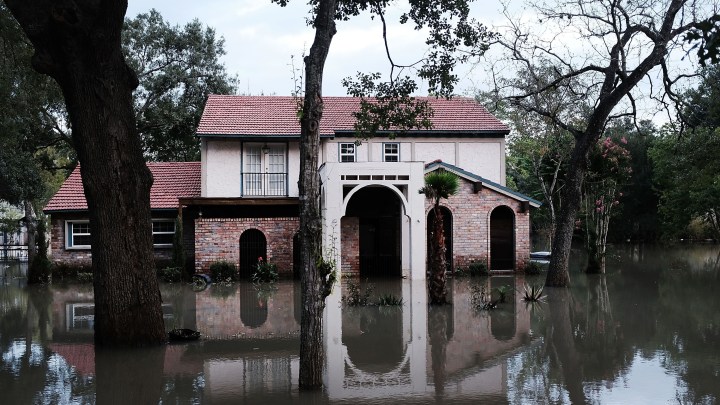 COPY
A Houston home sits in floodwaters from Hurricane Harvey in 2017. Many in Houston did not have flood insurance. Spencer Platt via Getty Images

A Houston home sits in floodwaters from Hurricane Harvey in 2017. Many in Houston did not have flood insurance. Spencer Platt via Getty Images
Listen Now

More than a quarter of the homeowners who bought policies through the National Flood Insurance Program dropped it within five years, according to a new study by the Government Accountability Office.

That gives you some sense of the problem facing the folks at the Federal Emergency Management Agency, which runs the program, as they try to get more at-risk households to sign up.

“That number doesn’t even tell you how bad it is,” said former FEMA administrator Craig Fugate.

That number only applies to those people who received assistance when their houses flooded or those with federally backed mortgages who live in 100-year flood plains, he said. They have to have insurance.

“The bigger number is the people who don’t live in a special flood-risk area that don’t have flood insurance, that are at flood risk and have no coverage,” Fugate said.

That included many of the people in the Houston area during Hurricane Harvey. For a lot of those affected, flooding was caused by the intense rain; they weren’t told they had to buy flood insurance, so they didn’t.

“It’s not an unknown problem. It’s a marketing and communication problem,” Fugate said.

“Everybody has pieces, and nobody has all of it,” she said.

For instance, bank regulators monitor the mandate flood insurance, while FEMA administers the coverage. There are holes in that data too, said Carolyn Kousky, executive director of the Wharton Risk Management and Decision Processes Center at the University of Pennsylvania.

“There’s no way to know why someone dropped their policy,” Kousky said.

“So it makes it hard to know, you know, how much is really a compliance problem and how much is not,” Kousky said.

The upshot is it’s really tough for homeowners to know if they’re at risk of flooding and should get insurance. The GAO report suggests FEMA take the lead.