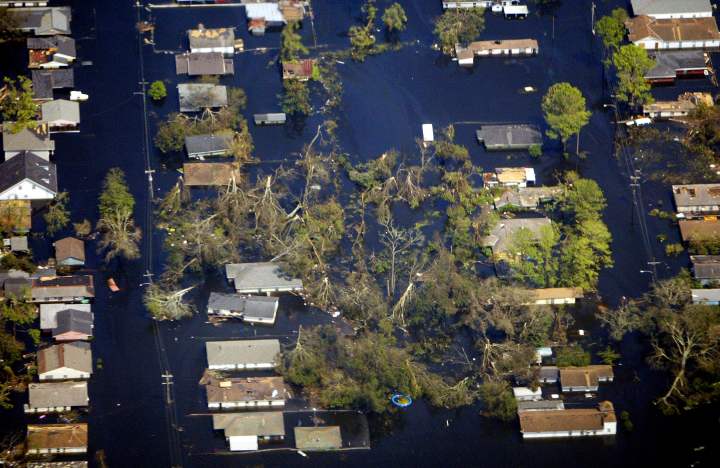 A neighborhood in New Orleans in 2005, just after Hurricane Katrina, which brought devastating flooding to Louisiana, Alabama and Mississippi. Jim Watson/AFP via Getty Images
Check Your Balance ™️

A neighborhood in New Orleans in 2005, just after Hurricane Katrina, which brought devastating flooding to Louisiana, Alabama and Mississippi. Jim Watson/AFP via Getty Images

Watch the local news after almost any natural disaster, and chances are you’ll hear some version of this story that Janice Lewis told WLBT in Jackson, Mississippi.

“Unfortunately I didn’t have flood insurance,” said Lewis, whose home is one of the more than 1,000 in Mississippi that have flooded in the last week when the Pearl River overflowed its banks after days of heavy rain. “I hope that I’ll be able to get some government assistance, and family and friends to help out.”

Lewis is hardly alone in being uninsured, and not knowing how she’s going to pay for the cost of cleaning up and repairing her house. Nationwide, FEMA estimates that only about 4% of properties are insured through the National Flood Insurance Program, which accounts for the vast majority of all flood insurance in the country. Even in areas that are considered high risk for flooding, just one in three properties are insured. With climate change bringing more extreme weather and more flooding, this is becoming an increasingly urgent issue across the country.

“There aren’t really good ways for people to finance their recovery instead of flood insurance, there’s really no substitute for it,” said Carolyn Kousky, executive director of the Wharton Risk Center at the University of Pennsylvania.

“Flooding is the most costly natural disaster in the United States, and a serious flood event can cause thousands, tens of thousands, even more dollars of damage to a home. So when that happens, how do you pay for that and get back on your feet? If you’re a very affluent family, you might have enough savings to just fund the recovery and the rebuilding on your own. But for the vast majority of Americans, that’s not the case.”

It’s still too early to know exactly how many of those affected by the flooding last week in central Mississippi had flood insurance, but Mississippi Insurance Commissioner Mike Chaney said he expects it’s likely less than half.

David Maurstad, the deputy associate administrator for FEMA’s Federal Insurance and Mitigation Administration and chief executive of the National Flood Insurance Program, said he’d be surprised if it’s that many.

People who didn’t have flood insurance will effectively be on their own. Regular homeowners insurance doesn’t cover flood damage, something Chaney has been reminding people publicly every chance he’s gotten pretty much since 2005, after Hurricane Katrina. But the number of people who have flood insurance in Mississippi has dropped in recent years, from more than 74,000 in 2015 to just over 61,000 today. The same thing has happened across the country — fewer Americans have flood insurance now than did a decade ago. Even as flooding is becoming more frequent.

“The people that find themselves in a situation with no flood insurance and the home’s been flooded, they face a crisis,” Chaney said. “They’ve either got to lower their standard of living or move somewhere else. And it’s a financial burden.”

People often assume that if there is a disaster, the federal government will come in and help them rebuild. But that doesn’t happen in every case — only when a flood or storm or fire is big enough, and the damages high enough, to trigger a presidential disaster declaration. Even then, aid can take months or longer, and is rarely enough to cover the cost of rebuilding.

In the areas of Houston that flooded during Hurricane Harvey, homeowners who did not have flood insurance ended up getting, on average, about $6,000 from FEMA, according to Maurstad. People who had flood insurance got around $114,000.

Aside from individual disaster assistance grants from FEMA, the other federal aid that’s available to people who don’t have flood insurance comes in the form of a loan from the Small Business Administration.

“But a lot of these homeowners, the last thing they need is another loan against their home,” Maurstad said. “So it just makes sense from a personal financial management perspective for people to have the flood insurance coverage they need for flood events, just like the fire insurance, the hail insurance, the wind insurance that they have to protect their home after those types of events.”

“Flooding happens everywhere in the U.S. Ninety eight percent of the counties in the U.S. have had a flooding event,” he said. “It’s a continual challenge to us to make sure that people really understand their flood risk. That where it can rain, it can flood. And they shouldn’t focus just on a line on a map, but really determine what their flood risk is.”

When given the choice, though, people tend to opt out of buying what they perceive as extra insurance.

“There’s all the behavioral economics and cognitive psychology literature that shows that people are really poor evaluators of risk and uncertainty,” Kousky said. “People tend to be overly optimistic and think they’re not going to be the victims of a disaster.”

Especially if you’re lower income. And FEMA has found that low-income people are the least likely to have flood insurance. They also often end up facing years of financial hardship after a flood or other natural disaster.

“Ten years after Hurricane Katrina,” the Brookings Institution found, “residents whose homes flooded during the storm had lower credit scores and rates of home ownership than their neighbors who were spared the worst.”

That is why Chaney is constantly reminding people in Mississippi, every press conference, every chance he gets, that homeowners insurance does not cover flood damage, and that they should buy flood insurance — whether they’re in a flood zone or not. (In an average year, Maurstad said, 20% of NFIP claims come from areas that are not considered high risk for flooding.)

“Check your homeowners policy. You’re not covered by flood unless you purchased it. We tell homeowners that all the time. They hear it from me so much that my wife says I’m repetitious,” Chaney said. “I said, that’s the only way you get the point across.”

Beyond reminding individual homeowners about the importance of having flood insurance, Kousky believes something needs to change at the federal level to help low-income people living in vulnerable areas afford flood insurance and mitigate their risk before disaster strikes.

“I think one of the biggest challenges right now with our flood insurance program, with our disaster recovery programs in general, and with the money we give out to reduce risk … none of those programs are sufficiently means tested so that we’re giving the help to the people who need it the most,” Kousky said. “There’s no program to help low-income people afford flood insurance. There’s no extra assistance through the FEMA program to give more to the low-income people who need it for recovery. I think this is an area where we really need some policy reform.”

Maurstad said those conversations are happening now in Washington.

But until and unless something changes, people who don’t have flood insurance — including many homeowners now in Mississippi — are largely on their own when it comes to clean up and recovery. Whether or not they have the money.