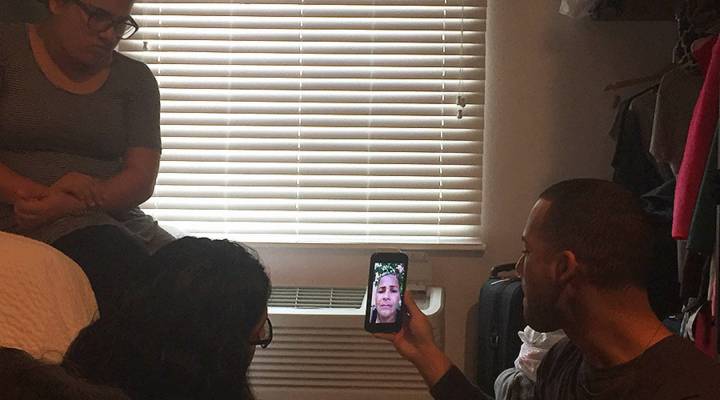 COPY
Wireless internet at an extended-stay FEMA hotel in Orlando is the main way the Hernandezes keep in touch with family still in Puerto Rico. Renata Sago/Marketplace

Wireless internet at an extended-stay FEMA hotel in Orlando is the main way the Hernandezes keep in touch with family still in Puerto Rico. Renata Sago/Marketplace
Listen Now

The third-floor room at one of the extended-stay Federal Emergency Management Agency hotels for Hurricane Maria evacuees in Orlando is small, but Jose Hernandez, his mom and two younger sisters make it work. They have three beds, including a blow-up mattress propped up against the wall. Everyone has their own dresser drawer, and their clothes hang neatly, sectioned off on top of their suitcases in a corner closet. They even have a small white plastic Christmas tree with a Puerto Rican flag next to it. The setup is missing a lot of comforts, but it does have one important necessity: free wireless internet. It’s their only connection to family back home.

“I don’t know if they have any signal right now. I will try to call them and see,” Hernandez said, opening Whatsapp on his phone. He uses the free Wi-Fi calling app throughout the day to check in with his grandmother, aunts and cousins. They own a business and property back on the island and have vowed to stay. Their Wi-Fi is spotty and they have to rely on generators to charge their phones, but they manage to communicate often.

“Hola, mi amor,” he hears through the phone, though the signal is not strong and his family members say they can’t hear him.

Coming to the mainland was never a plan for Hernandez. But the 22-year-old lost his job at a restaurant on the island. He couldn’t return to the University of Puerto Rico, where he had been working toward his bachelor’s degree in communications, because the university closed. His mother couldn’t return to the hospital where she worked, because it collapsed in the hurricane. About a month and a half after the storm, a friend’s family gave them with some plane tickets to Florida, and they left.

After staying in transitional housing with help from Catholic Charities and United Way, the family was able to secure a room at the hotel through mid-January. They are slowly getting into a routine. Hernandez’s young sisters are enrolled in middle school and he has two jobs — one waiting tables at a popular tapas restaurant called Cafe Tu Tu Tango, and another selling theme park passes at Universal Studios. His mom can’t find work as a secretary, though. She’s trying to learn English.

“It’s been hard. We didn’t know about the costs. Here it’s really high. I’m the only one working right now, and that’s not good,” Hernandez said.

Phone calls back to family on the island are like doses of oxygen.

“They always say to us that we have to be positive. Never give up — that’s what they say to us. And no matter what we decide, they want us to be better and have a very good life.”

The Hernandez family’s next move is to find an apartment. They have decided to settle in Orlando.

They’re just some of the latest of about 200,000 Puerto Ricans who have left the island for Florida after Hurricane Maria.

According to Luis Martinez-Fernandez, a historian at the University of Central Florida, past waves of migration from the island have happened in slow motion, but Hurricane Maria prompted a much more sudden disruption.

“During the other waves, people could plan to relocate,” he said. “Maybe they could travel here, maybe find a job, stay with relatives. What we’re looking at now has a sense of urgency.”

He added it’s because Maria struck an island that had already been handling a systemic crisis with deteriorated infrastructure and growing debt. Even as people leave, though, they can maintain more of a connection than in the past.

“People can Skype. People can travel for what’s not large amounts of money. What we used to see as an almost complete breakup of the family, well, now we have families that are actually living in both places,” he said.

Martinez-Fernandez estimates that 750,000 people will leave the island in the next four to five years. That’s nearly a quarter of the population.

Anthony Oliver-Smith, a professor of anthropology at the University of Florida, has studied disaster and forced migration for more than 40 years. He finds that attachment to a place can be powerful enough to keep people from leaving even after disaster.

“It can be very psychological,” he said. “There are also very practical dimensions to it: ‘This is where I have my land. This is where I make my living.’ When it’s forced [migration], it’s incredibly traumatic. When it’s a choice, sometimes it’s a very difficult choice.”

Historian Martinez-Fernandez imagines that the next group of people leaving Puerto Rico will be mostly property owners who will have to give up on rebuilding. Having home insurance there is not as customary as it is on the mainland.

“What do you do if you have $30,000 worth of damage? You have no insurance?” he asked. “It’s very hard to rebuild when you don’t have the resources to do that.”

Martinez-Fernandez expects other, future migrants will be business owners who can’t make a profit with fewer customers around.

And if and when those holdouts leave, it’ll be easier since they’ll have relatives, like Jose Hernandez, to connect with on the mainland.